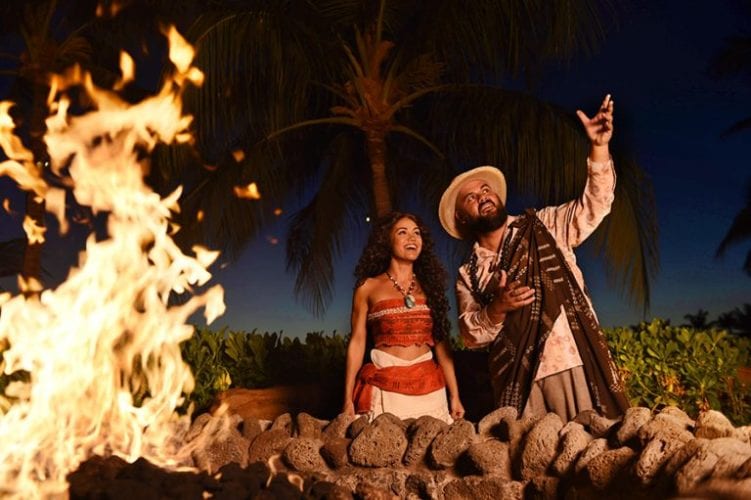 Celebrate the spirit of Moana with new premium experiences at Disney’s Aulani resort.

During “Kakamora Chaos with Moana” at Aunty’s Beach House, Moana is eager to learn more about her new friends, especially the games they play. During this interactive 90-minute experience, young guests will learn to play children’s games from Hawai‘i, as well as a game from Moana’s home island of Motunui, called the “Kakamora Relay.” There is an additional charge to participate in “Kakamora Chaos with Moana,” and advance reservations are strongly recommended. Call the Reservation Center at (808) 674-6200 for details.

In addition, guests can join Moana and Aulani Resort’s beloved storyteller “Uncle” as they share the importance of the canoe—or wa‘a—during Kahakai Canoe Racing. The interactive activity concludes after building a canoe model and racing in the lagoon.

Finally, in the evenings, resort guests may choose to wind down around the fire pit as Moana and Uncle recount tales of adventure during Mo‘olelo Firepit Storytelling. And Moana makes a special appearance during the lively pre-show of the resort’s KA WA‘A lū‘au, which pays homage to the journey the Hawaiian people made across the ocean.

Stay tuned to our website, Twitter and Facebook for more updates during the “12 Days of Disney Parks Christmas.” Read up on the announcement of Disney Skyliner concept art, as well as the announcements on new float elements coming to Pixar Play Parade at Disneyland Resort and an expanded Food & Wine Festival at Disney California Adventure.

For more about Moana, watch these videos:

Join us for ‘Early Night Live’ inside...