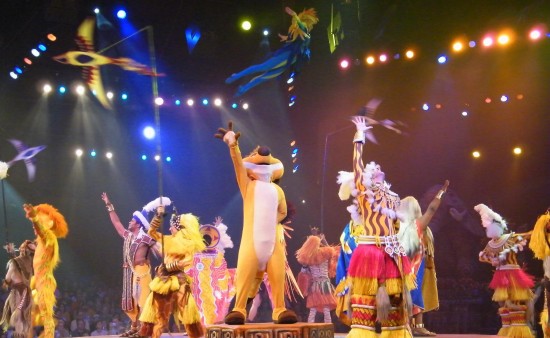 Next year will mark the biggest change at Disney’s Animal Kingdom in preparation for the addition of the planned Avatar area.

Walt Disney World has officially announced on the Disney Parks Blog that in 2014, the popular “Festival of the Lion King” show at Animal Kingdom will be moved from its current location in Camp Minnie-Mickey to a new home in the Africa section of the park.

“Festival of the Lion King” has been a staple at Disney’s Animal Kingdom since the park opened in 1998 and continues to wow guests with its tribal celebrations to this day. The new theater will be located to the west of Harambe Village in Africa, behind the Tusker House Restaurant. There’s no word if the show will undergo downtime during the move.

A new area of the park with attractions based on the Avatar movie was announced in 2011. It is expected to be complete around 2017. More details about Avatar are expected to be announced at the D23 Expo in August.

Lion King belongs in Africa anyway so this isn’t such a bad idea. I, for one, can’t wait to see what they can do with Avatar!

I just think this whole “Avatar” idea is a bit dumb. If there was going to be an amusement area based on Avatar, shouldn’t it be in Universal Stuidos? I didn’t even think the movie was all that great, so maybe I’m a bit biased.

It does belong in Africa and it’s a bit to long for me when I saw it a coule of years ago. Avatar is okay but not sure a whole area can be designated for it. Start with a ride a develop from there.

I think Avatar could be very beautiful and a welcome addition to AK. But, they could do away with much of Dinoland. It just does not seem to fit with the rest of the park.