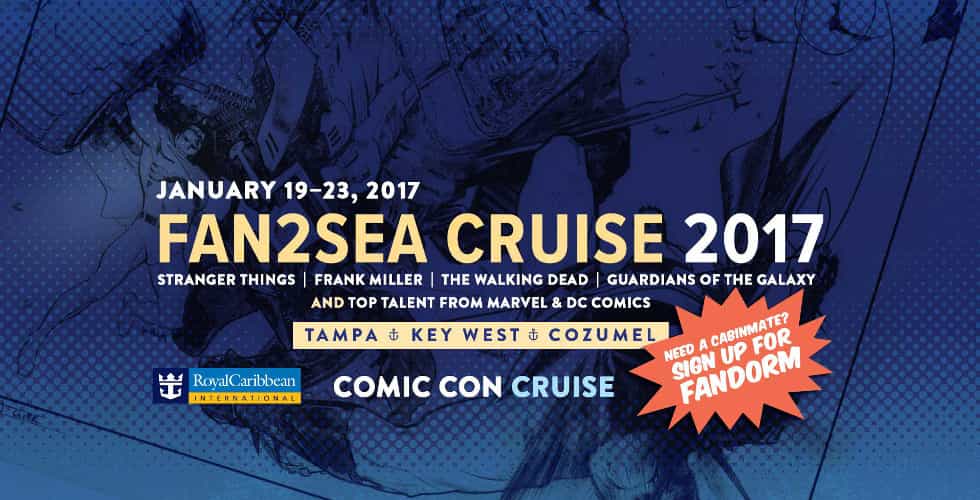 Fans of Stranger Things, Walking Dead, and other sci-fi and fantasy fiction can meet their heroes on the high seas during Royal Caribbean’s first Fan2Sea comic convention cruise in January.

The first-ever comic con cruise, Fan2Sea, is scheduled to be held from January 19-23 departing from Tampa with port calls in Key West, Florida and Cozumel, Mexico. FAN2SEA is taking place aboard Royal Caribbean’s Brilliance of the Seas, and will feature a star-studded lineup, master and spotlight classes offered by Marvel Comics and DC Comics talent, opportunities to interact with celebrities and comic book heroes, “cosplay” costume contests and parties, movie marathons and gaming, as well as other cruise entertainment and meals.

During the all-inclusive cruise, several panels will be held, including a Stranger Things panel, which will feature Millie Bobby Brown, David Harbour, Caleb McLaughlin, Randy Havens and more members of the cast and creators of Netflix’s hottest new show, Stranger Things.

Additionally, there will be a panel featuring comic book legend, Frank Miller, and team members from Batman’s Dark Knight III, which include Brian Azzarello, Klaus Janson and Andy Kubert.

Other panels include actors and celebrities from The Walking Dead and Guardians of the Galaxy.

Early purchasers can use the code IRONMAN when purchasing tickets, to receive a 10 percent discount, while discounted rooms last. Tickets start at $399 per person before any discounts are applied.