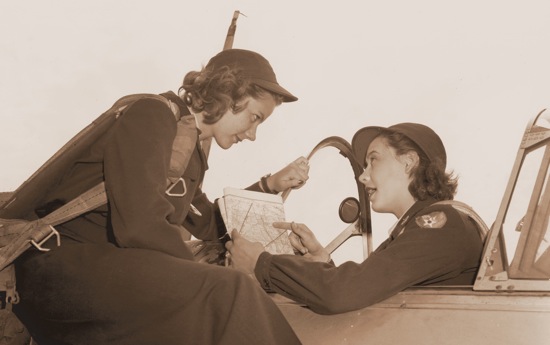 Fantasy of Flight will hold the second event in its three-part “Living History” Symposium Series, “A Passionate Pursuit,” featuring the WASP — Women Airforce Service Pilots tomorrow, March 27 and Saturday, March 28. The WASP are a spirited squadron of pilots who left their homes and jobs at the height of World War II to serve their country as the first American women to fly for the U.S. Military.

Part two of the Symposium, in honor of Women’s History Month, and will showcase the experiences of some of America’s most courageous aviators through permanent and semi-permanent exhibits, real aircraft, and personal stories from real WASP pilots who will be answering questions and interacting with guests.

Betty Blake
On Dec. 7, 1941, 21-year-old pilot Betty Blake was scheduled to fly a tourist from one Hawaiian island to another. Lucky for her, the tourist cancelled the reservation and Blake was not in the skies when the Japanese bombed Pearl Harbor. Although she wasn’t hurt, several of her Navy friends were killed and the event changed her life forever. She soon enrolled in the WASP program and flew planes from factories to bases on the Atlantic and Pacific coasts where they would be deployed for combat. Blake recalled, “They didn’t think girls would be able to fly military planes,” but together, the fearless female pilots logged nearly 60 million miles before the program was disbanded in Dec. 1944.

Helen Wyatt Snapp
Helen Wyatt Snapp was working as a government clerk in Washington, D.C. when she decided to take advantage of Franklin D. Roosevelt’s new Civilian Pilot Training Program and quickly earned her private pilot’s license. While her husband, Ira Benton Snapp, was serving overseas, Helen heard about the WASP program and wanted to do her part. She was accepted into the program in Jan. 1943 and served at Liberty Field in Camp Stewart, Ga. until WASP was de-activated. By that time, Snapp had completed more than 1,000 hours of flying time and flew numerous target missions, towing targets for live fire on anti-aircraft ranges.

Bernice “Bee” Falk Haydu
Bernice “Bee” Falk Haydu was an engineering test pilot and utility pilot for WASP for only one year before the program was disbanded, but she later served as President of the Order of Fifinella, the WASP alumnae organization, and was instrumental in the fight to obtain WWII Veterans’ status for members of the group. The battle for Veterans’ benefits took two years, a national media tour and “much midnight oil being burned,” but the bill was signed into law by President Jimmy Carter in Nov. 1977. An active pilot, flight instructor and aviation business owner, Haydu also was instrumental in starting a new group, Women Military Pilots, which was later changed to Women Military Aviators to incorporate women other than pilots. Her WASP uniform can be seen on display at the Smithsonian Air & Space Museum in Washington, D.C. and she wrote a book detailing her WASP experience, entitled Letters Home 1944-1945. For all of her contributions to her country and to the field of aviation, Haydu was inducted into the Aviation Hall of Fame in 2000.

“It’s hard to believe that almost 70 years ago, these gutsy ladies stepped into the cockpits of fighter planes to serve their country in its time of need, and have been breaking barriers for women ever since,” said Fantasy of Flight founder and creator Kermit Weeks. “It is my extreme privilege to welcome them to Fantasy of Flight to share their amazing stories first hand.”

The third in the “Living History” series will take place May 2 featuring Fighter Aces featuring bombers and crew in honor of National Military Month. The fourth in the series is June 20 with a Military Collectors Show and re-enactment in which several aviation heroes will speak.

During these days, as well as June 21, the attraction will also feature “Open Cockpit Days” during which guests are invited to get up close and personal with some of America’s most rare vintage aircraft and can climb aboard.

Cost of each “Living History” symposium is included with Fantasy of Flight admission, which is $28.95 for adults, $14.95 for children ages 6 to 15, plus tax. Children 5 and younger are free.
Open Cockpit Days are free for Annual Passholders and $20 additional for paid guests.

Directions
From Orlando, go West on I-4 towards Tampa. Take the SR-559 exit – exit 44. Turn right toward Polk City and Fantasy of Flight. At the flashing red light, turn left.

For more information about Fantasy of Flight, call 863-984-3500 or visit fantasyofflight.com.