First Lady Michelle Obama and a few Disney Channel stars visited Walt Disney World yesterday to speak to hundreds of local children and parents about the importance of exercise and eating right. But they not only talked about it, they got some exercise themselves as they did the The Platypus Walk and played some sports.

On a tour to celebrate the second anniversary of her Let’s Move! initiative, Obama was at the ESPN Wide World of Sports Complex. She also recognized the efforts of Disney Magic of Healthy Living, which partners with parents in their quest to raise healthy, happy kids.

“I want to thank Disney for all that they’ve done to support ‘Let’s Move’ and to make sure our kids are eating right and being active,” Obama told the audience before joining Disney Channel and Disney XD stars for the new dance, “The Platypus Walk,” inspired by the hugely popular “Phineas and Ferb” character Perry the Platypus.

U.S. Sen. Bill Nelson welcomed the crowd of nearly 1,500 children and families, demonstrating his own commitment to physical fitness by completing 50 push-ups on stage. 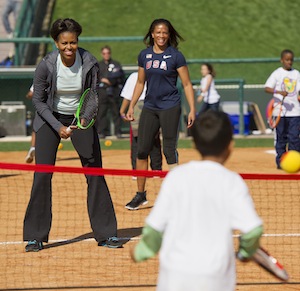 Brandon Delfosse, a 13-year-old student at Orlando Science School and member of Big Brothers Big Sisters of Central Florida, attended the event and was pleased Obama and Disney supported healthy living. “It’s very cool knowing someone cares about you… It’s smart. Disney is popular, and it helps get the word out.”

The 2010 launch of Disney Magic of Healthy Living included a series of public service announcements featuring the first lady that inspire children to take control of their own health, fitness and nutrition, and encourage their families and friends to do the same.

For more information about the program, as well as recipes, tips and videos, visit Disney.com/TryIt. For details about the Let’s Move! initiative, visit LetsMove.gov.

From unusual fried foods to crafts, animals and rides, the Florida State Fair offers a wide variety of fun

‘Phineas and Ferb The Movie: Candace Against the...

NBA Board votes for season restart moving to...

I have always used coupons, but if I thought the generic was cheaper I would just buy that instead of the smaller name brand size or even samples from “Get Official Samples” can help