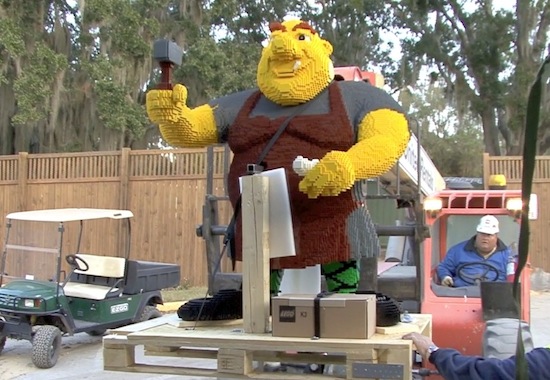 Legoland Florida recently recieved their first of 50 shipments of Lego models for the new theme park. The life-size models were made by hand in Europe especially for Legoland and will be featured throughout the park when it opens this October.

Included in this first shipment were a 40,000 brick blacksmith for Castle Hill, a shark’s head for Skipper School and Merlin the Wizard for inside the Castle. Also on the list were various birds, gargoyles, guards, knights and fish.

Once complete, Legoland Florida will have more than 30 million Lego bricks spread around the 150-acre theme park, all cared after by a staff of six model builders and designers. Since the park is designed specifically for families with children ages 2-12, some of the models even have humorous features such as an audibly snoring grandpa. (Past visitors to the Lego Imagination Center at Downtown Disney may remember grandpa, as he used to be on display outside the store.)

Each model was painstakingly wrapped to preserve the precious contents before being loaded for a two week journey on a shipping container ship-bound for Florida.

Mardi Gras returns to Universal with food, parades and concerts

I remember the snoring grandpa model from downtown disney! Its great that the US is getting another LEGOLand park. Makes sense that it will be in Orlando as well. I’m actually surprised that wasn’t the site of the first park here but I’m also lucky that Carlsbad is in my backyard. Should be great for East Coast residents to have this new park!

Excellent blog! I thought I would drop a quick note and make this suggestion. Aucklands Trade Guys electrician are the best in town.

What great advice. I cant wait to get there!

Exclusive interview with the art director of...

A who-bilation of holiday fun at the...

E.T. reunites with Elliott for the holidays...