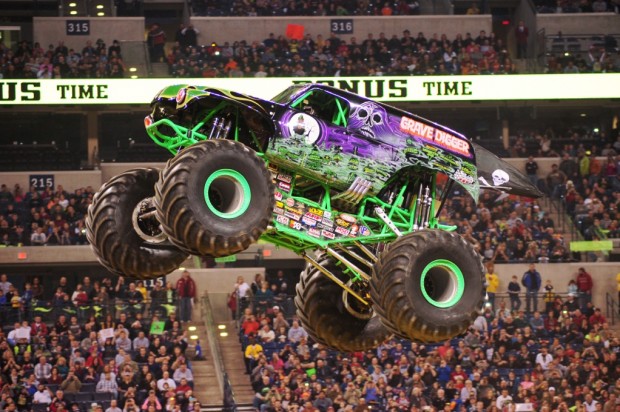 Monster Jam makes its return to the Orlando area on Jan. 25, 2014 when the annual motor sports spectacle drives into the Florida Citrus Bowl Stadium, marking the final event before the stadium is partially demolished and rebuilt.

The Monster Jam is one of Orlando’s largest single-day stadium events, attracting capacity crowds of over 60,000 fans. A field of 16 monster trucks will compete in side-by-racing and freestyle competition where each monster truck gets up to 120 seconds to “wow” the crowd with huge jumps, wheelies, truck-spinning donuts, flips, and the destruction of cars, vans, buses, motor homes and more.

Advance purchase tickets are $15 for general, $35 for VIP seating and $25 for sideline seats. Tickets are on sale now at all Ticketmaster outlets, the Amway Center Box Office, or ticketmaster.com. Get more show information at MonsterJam.com.

Here’s an interview we did with Dennis Anderson and Candice Jolly in 2012:

Monster Jam has rarely seen a winner take the title by .03 seconds (laser timed) and then go out and win Freestyle in the way that Maximum Destruction did in 2012 at the Citrus Bowl. Here’s a look:

Gatorpalooza takes over the “Alligator Capital of...