Henri Landwirth, founder of Give Kids the World Village, dies at 91 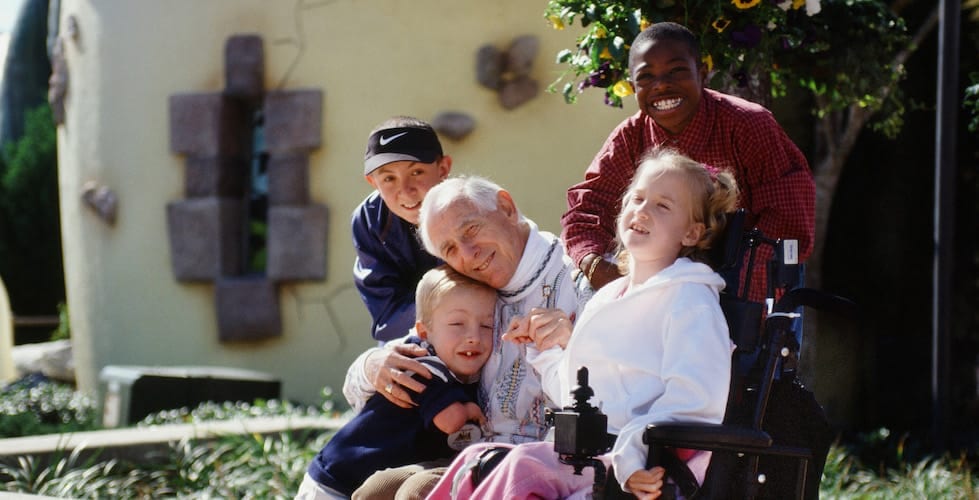 Henri Landwirth, the founder of Give Kids the World Village, has died.

Henri Landwirth, the founder of Give Kids the World Village and former Central Florida hotelier, has died. Landwirth was 91.

The Belgian immigrant retired many years ago from the day-to-day operations of Give Kids the World, the Kissimmee, Fla. charity he began in 1986. Landwirth was living in Jacksonville, Fla., where he died of natural causes on April 16.

Give Kids the World Village, the nonprofit vacation resort, hosts more than 8,000 children with critical illnesses and their families from all over the world every year. Landwirth is known and remembered for his advocacy of behalf of these young people who face the unimaginable.

“Words cannot express the sense of loss we feel today,” said Pamela Landwirth, president and CEO of Give Kids the World and Henri’s former wife. “Henri was a remarkable man who worked tirelessly to help our precious children and their families. He has left behind an enduring legacy of compassion and love.”

After several decades of being a successful hotel owner in Florida, Landwirth set out on his mission to better the lives of critically ill children and their families in 1986 after hearing the death of a girl named Amy.

Amy, a six-year-old child who suffered from terminal leukemia, had a wish to meet Mickey Mouse that went unfulfilled when she died, while arrangements were still being made to bring her family to Central Florida.

“Though I never knew her, Amy’s death became the catalyst for building Give Kids the World and has affected everything in my life since,” said Landwirth in his 1996 autobiography, “Gift of Life.” “I hurt for the family’s loss, but I also felt angry. How could this happen? How could we allow a child to die before she could see Mickey Mouse? How in America could we not fulfill any child’s last wish?”

In 1989, he opened Give Kids the World Village on 35 acres, near Walt Disney World Resort. The Village was filled with fun and whimsical architecture and supported by a small staff and a large amount of volunteers. The nonprofit resort then began to provide weeklong, cost-free vacations to children with critical illnesses and their families.

Landwirth’s work continues today, with the Village more than double its original size at 84 acres. The Village and its partners accommodate their guests with fully-furnished villas, offer them transportation, tickets to theme parks, complimentary meals, daily entertainment and more.

“Most people lend their hands and hearts to Give Kids the World every day,” said Landwirth in the early days of the Village. “The vision for the children is growing. Hope is growing. I promise each of you, that as long as there is a terminally ill child who dreams of meeting Mickey Mouse, Give Kids the World will be there. Our promise will remain constant: No child in need will ever be turned away.”

Other organizations that carry on Landwirth’s legacy include The Fanny Landwirth Foundation, which works to address community needs through financial support of nonprofit organizations; the Henri Landwirth Society, which helps members include Give Kids the World Village in estate planning; and the Astronaut Scholarship Foundation, created in partnership with the Mercury Seven heroes, to support American scholars in science, technology, engineering and mathematics (STEM).

To learn more about Give Kids the World Village, visit GiveKidsTheWorld.org.

This Disney-themed wedding is a theme park-lover’s dream

I had the remarkable chance to meet Henri at Give Kids The World. He was a gentle man and I have always remembered my time as a volunteer for those precious children and His legacy.