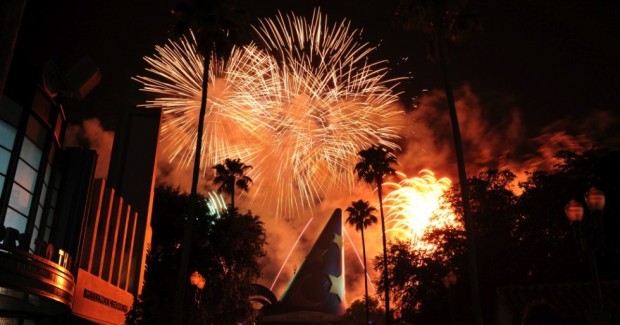 Central Florida’s many theme parks will light the night skies July 4, 2014 with special pyrotechnic shows, including a patriotic display at Magic Kingdom, a rock n’ roll spectacular at Disney’s Hollywood Studios, Red, Brick and Boom at Legoland Florida and more.

MAGIC KINGDOM
“Disney’s Celebrate America! A Fourth of July Concert in the Sky,” will be shown on July 3 and 4. The 14-minute fireworks show rockets into the sky above Cinderella Castle at 9 p.m. both nights. The fireworks are set to a musical score produced in a concert band style, specifically created to stir a sense of pride in being American, show producers say, while at the same time, inviting guests from around the world to feel part of the celebration.

EPCOT
Guests visiting Epcot on July 4 will have the opportunity to meet some of their favorite Disney characters dressed in patriotic attire throughout the afternoon at the American Adventure Pavilion. Voices of Liberty, the eight-part a capella group, will have special performances at American Gardens Theatre at 12:30, 1:45 and 3 p.m. They also will perform inside the American Adventure Rotunda at 4:15 and 5 p.m. that day.

Guests also will have the opportunity to catch the Spirit of America Fife & Drum Corps outside at 1, 2:15, 3:30, 4 and 4:45 p.m. That evening, the fireworks and laser show “IllumiNations: Reflections of Earth,” lights the night at 10 p.m. with a grand finale in a salute to America.

DISNEY’S HOLLYWOOD STUDIOS
Guests can enjoy a twist on traditional fireworks with the “Rockin’ 4th of July Celebration.” The party kicks off at the Sorcerer’s Hat stage at 6 p.m. and continues through 11 p.m. on July 4 with live entertainment from “The Hollywood Rockers,” leading up to a special rock n’ roll fireworks presentation at 10:15 p.m.

SEAWORLD ORLANDO
Guests can enjoy the new nighttime Shamu show, Shamu’s Celebration: Light Up the Night, at 9 p.m. Then at 9:45 p.m., there will be an special performance at SeaWorld’s Bayside Stadium by an ensemble group of singers and a nine-piece band, who will perform a variety of popular music ranging from traditional marches and patriotic tunes to classical favorites. The Fourth of July celebration culminates with a special fireworks display.

LEGOLAND FLORIDA
Legoland Florida is celebrating the 4th of July weekend in 2014 with its annual Red, Brick and Boom event. From July 4-6, three nights of fireworks set to The Lego Movie soundtrack will light up the sky for all guests to experience, including special viewing glasses to turn fireworks into millions of exploding Lego bricks. There will also be a collective, interactive build of a giant Lego American Flag, scavenger hunt and more.

Take a look below at some of the fireworks displays you can see around Orlando for the 4th of July:

Tickets for ‘Star Wars: Secrets of the...