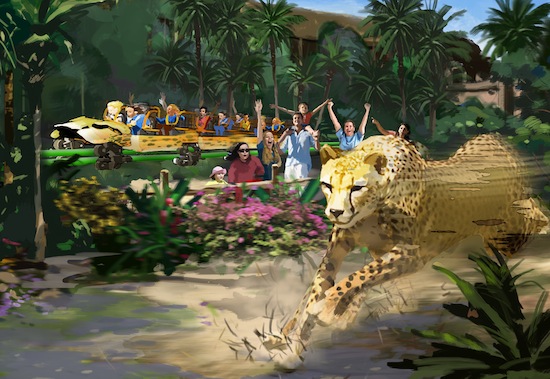 Busch Gardens has ended the speculation and stopped dropping hints. The new attraction coming in spring 2011 will feature a cheeta habitat called Cheetah Run and a roller coaster called Cheetah Hunt that will give riders three seconds of airtime and three boosts of speed along the track. 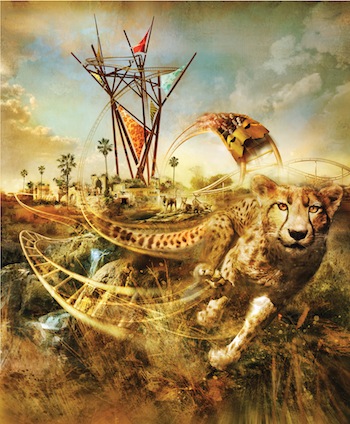 Cheetah Hunt will be a Linear Synchronous Motor (LSM) Launch Coaster that uses the force of repelling magnets to launch riders from 0 to 60 in a matter of seconds – not once, but three times. The coaster will board in Busch Gardens’ monorail station, which will be completely renovated as part of the new attraction.

The first launch propels the train out of the station and into the grasslands that surround the new area. Moments later, a second burst of speed accelerates riders to 60 mph and up into the ride’s signature tower element that climbs more than 10 stories above the African landscape before plunging 130 feet into a subterranean trench.

Cheetah Hunt covers a lot of ground, setting a new distance record for Busch Gardens’ roller coasters at 4,429 feet of track. After leaving the Crown Colony Plaza area, it races across a portion of the Serengeti Plain, staying close to the ground to give guests the experience of a cheetah sprinting across the plains. Elements such as over-banked turns, air-time parabolas and a heart line roll inversion imitate the agile creature chasing its prey, leaping and pouncing into the Nairobi area, where the train twists through a rocky gorge that was formerly part of Rhino Rally. At the far end of this three-quarter-mile path, a third burst of speed send the train back across the plain toward the station.

The rumored name for the coaster was CheeTaka, and that name was even used as the title of a press release sent by Busch Gardens’ public relations department. That may have been a code name for the project or just a false name used to keep anyone from finding out the real name – Cheeta Hunt. 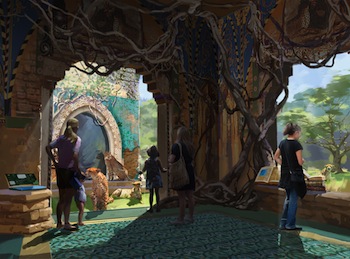 But the coaster is only a portion of the new realm. Cheetah Run will bring nature and humans together in a unique way. Located in the area that formerly housed the Budweiser Clydesdales, the expansive new habitat will give visitors the opportunity to get closer to cheetahs than ever before with elevated, glass-paneled viewing areas. Busch Gardens’ trainers will conduct daily sprints with the cheetahs for an opportunity to see one of nature’s true wonders in full form.

Families can also explore interactive touch screens to learn even more about these big cats and SeaWorld Parks & Entertainment’s work on their behalf. Through the SeaWorld & Busch Gardens Conservation Fund, the adventure parks have been helping wild cheetahs since 2005. 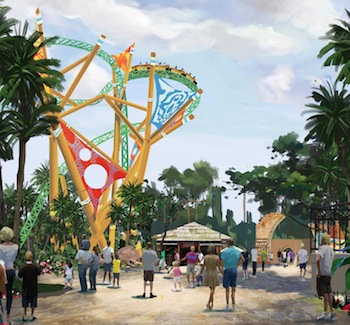 The realm surrounding this new mega-attraction offers many more opportunities for adventure and exploration. Built at the crossroads where Morocco, Egypt and the Edge of Africa areas of the park all come together, the plaza will be a bustling, colorful celebration inspired by the sights and sounds of the cultures that feed into it. The Crown Colony House Restaurant will remain a focal point of the area with a new, terraced entrance that will feature additional outdoor seating and natural landscaping.

Here’s a point of view rendering of your view while riding Cheetah Hunt:

Here’s another view of the coaster from onboard and of watching it zoom by:

UPDATE: Busch Gardens officials have answered some of our questions about the new roller coaster:

Will Cheeta Chase be renamed or removed?
Cheetah Chase will remain in Timbuktu, but we’re not ready to make any announcements about possible name changes.

Was CheeTaka a code name? Why wasn’t it used?
We have enjoyed following all the speculation and the excitement that has played out in the social and traditional media realms regarding the new attraction. We never confirmed any names. Now that we have confirmed Cheetah Hunt and Cheetah Run, we are excited that it will be a surprise for the fans who have been following the new attraction’s development.

Can you give us a closer date of completion than spring?
We are not prepared to announce an opening date just yet, but we anticipate a grand opening in late spring next year.

The artist’s animation lasts one minute. Is that how long each ride lasts without load and unload time?
Cheetah Hunt offers a longer ride time than any of Busch Gardens’ other coasters. The total experience will last three minutes and 30 seconds. From the first launch to the final brake, Cheetah Hunt’s movement will last approximately one minute and twenty seconds.

those answers are kinda cryptic….it’s the longest ride at 3:30 but it’ll only last 1:20? How do they figure that? A queue isn’t part of the ride, neither is an aquarium full of stingrays.

Disneyland park prepares for next phase of...