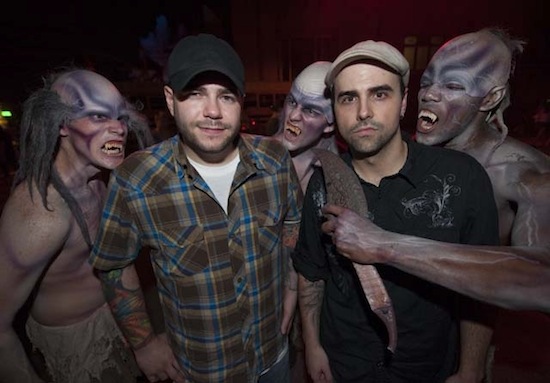 The Ghost Hunters are on the case again! Members of the hit Syfy Network TV show will be visiting Orlando again this Halloween season. Fans will have a few chances to meet them at various Orlando locations.

Last year Dave Tango and Steve Gonsalves visited both Halloween Horror Nights at Universal Studios and made an appearance at Spooky Empire’s Ultimate Horror Weekend. This year, they’ll be back at those events, and fellow Hunter Dustin Pari will also lead an investigation at Ripley’s Believe It Or Not on International Drive.

Dustin Pari of Ghost Hunters International and a member of The Atlantic Paranormal Society (TAPS) will be leading a paranormal investigation on Sept. 24, 2010 through the Castle Warden, home of Ripley’s Believe It or Not in St. Augustine. The next night, Sept. 25, he’ll be investigating the Ripley’s in Orlando. The investigations will not be televised, but limited tickets ($125) are available for the public to be part of the five-hour explorations at idealeventmanage.com.
UPDATE: The Investigation at Ripley’s has been postponed. The investigations will be rescheduled and tickets already sold for either event will be honored upon rescheduling, but customers are also able to obtain a full refund if they wish. All ticketing and refunding is being handled by TAPS at idealeventmanage.com.
UPDATE 2: Originally scheduled as back-to-back investigations at two different Ripley’s museums (St. Augustine and Orlando), the event has been changed to remain in the nation’s oldest city (and possibly one of its most haunted) for both nights, Oct. 15 and 16, 2010.

You can also meet Steve, Dave, Amy Bruni and other celebrities on Friday, Oct. 8 during Spooky Empire’s Ultimate Horror Weekend. The Horror Weekend runs through Oct. 10. Event admission is required.

Here’s an interview with the Ghost Hunters during the Ultimate Horror Weekend:

Interview with the Ghost Hunters at Spooky Empire 2009

A look at Magic Kingdom's unique pumpkins, and carving tips from the pros

A look at runDisney’s Wine and Dine...