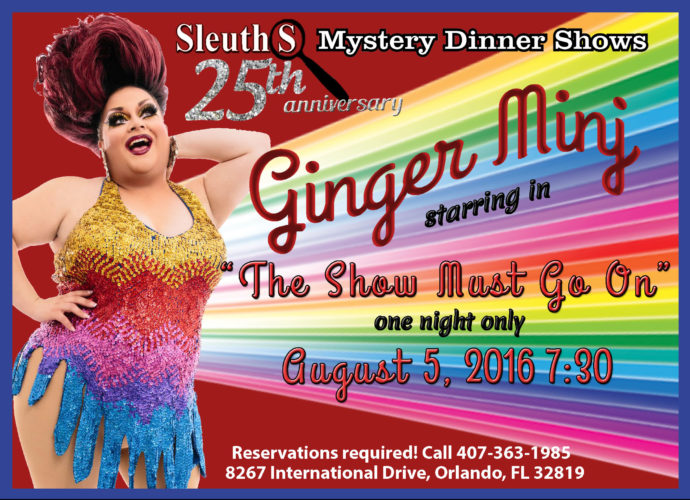 Before Ginger Minj became famous as a finalist on RuPaul’s Drag Race, she was a star in Orlando, and performer Joshua Eads is bringing her home to Slueths Mystery Dinner Shows for one night only on August 5.

The Ginger Minj character was born (in part) on the Sleuths stage, and on Friday August 5 at 7:30 p.m., she will return to her roots for one night only as the glamorous Madelaine in “The Show Must Go On”. Joshua Eads performed in a variety of roles at Sleuths Mystery Dinner Shows beginning in 2007, before finding fame as Ginger Minj. 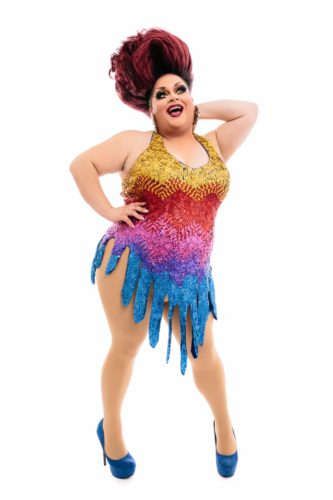 Ginger took the world by storm as a finalist in Season 7 of RuPaul’s Drag Race. Her competition highlights included a celebrity impersonation of Adele that scored her a win on the show’s “Snatch Game” challenge. Prior to becoming one of the most notable stars of RuPaul’s Drag Race, Ginger claimed the titles of “Miss National Comedy Queen” (2012) and “Miss Gay United States” (2013).

Joshua hails from Orlando, and he fondly considers Sleuths to be “home”. Between promotional appearances and worldwide tour stops, he is happy to return to familiar territory and add some of Ginger’s special brand of fabulous to the character of Madelaine, a faded Broadway star, and the owner of The Village Theatre. “The Show Must Go On” centers on a mystery that unfolds during the theatre’s auditions for an internationally touring musical, and keen observers in the audience can help foil the crime.

“The Show Must Go On” is one of thirteen mysteries in regular rotation at Sleuths Mystery Dinner Shows, where crime-solving is a nightly affair. Tickets for this special performance are priced at the standard dinner show pricing ($61.95 for adults and $28.95 for children ages 3-11). Admission includes the show, guest’s choice from three dinner options, and unlimited wine, beer, and soda. Reservations are required; call 407-363-1985 or 800-393-1985, or visit sleuths.com for more information.

For more about Sleuths Mystery Dinner Shows, watch this 2014 episode of Attractions The Show: