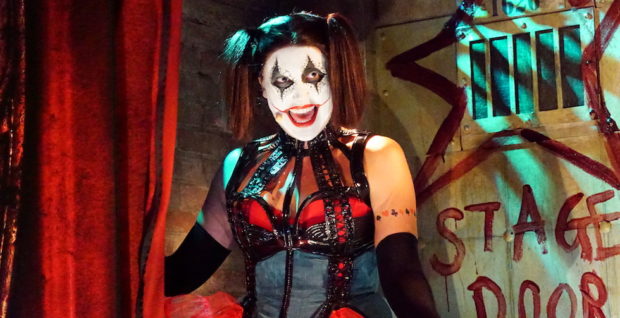 Halloween Horror Nights 26 starts this Friday, but we were able to attend a preview of what to expect inside the five Scare Zones.

Since this was an “Advance Screaming” for Universal Orlando team members, it must be noted this was a technical dress rehearsal, and all of the effects may not have been active. Also, keep in mind this event is intended for mature audiences, and so are our videos of it.

The first Scare Zone you’ll come across if you head straight when you get in the park is A Chance in Hell. It features several mini-stages, with Chance herself taking center stage as she fights with her own thoughts and has fun with guests looking on.

If you take a right when you get in the park, you’ll first encounter Vamp ’55. This Scare Zone is set up like a homecoming parade for Hollywood High School’s class of 1955, but vampires have disrupted the celebrations.

Head into the New York area and you’ll enter what looks like a war zone. In Survive or Die Apocalypse, you’ll find warring gangs looking to take control of a machine that provides clean air, and they are looking for new members. Join them, or feed their starving ranks.

You’ll find Dead Man’s Wharf in the San Francisco area of the park. The spirits of the fishing vessel Annabel Lee’s lost crew have returned to punish those who left them to die on the seas. The dock certainly lives up to its name.

The last Scare Zone is on the path by the NBC Media Center and it’s been transformed into the Lair of the Banshee. Here you’ll encounter evil spirits and horrific creatures of the ancient world inside a centuries-old dark hollow.

In addition to all these Scare Zones, you’ll find the Academy of Villains: House of Fear stage show set up near Mel’s Die-In. This performance troupe features high-energy dance and specialty acts themed to a prison riot at Shadybrook.

We also have a look inside the Halloween Horror Nights tribute store full of merchandise for sale from this year’s event. It’s located to the left of the Revenge of the Mummy entrance in the New York section of the park.

Stay tuned as we bring you a report from opening night and video highlights inside a couple of the houses from Halloween Horror Nights at Universal Orlando and Universal Studios Hollywood.