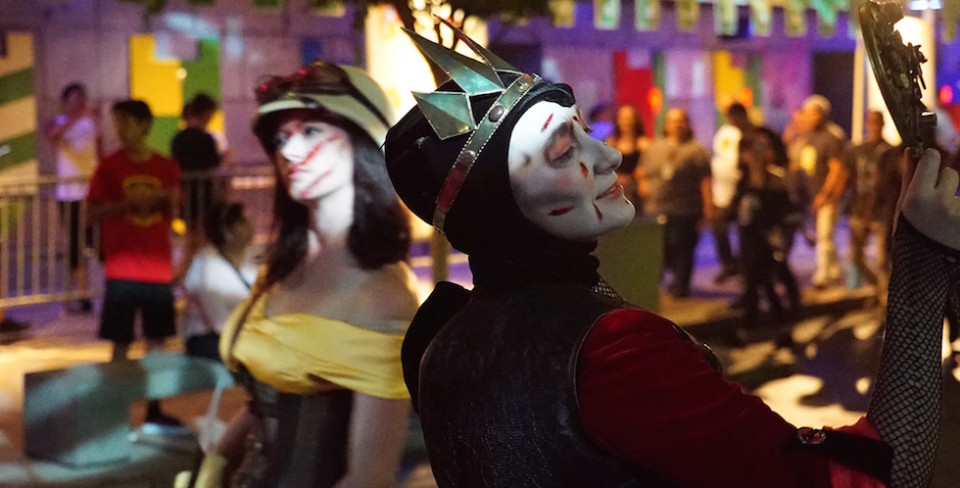 Halloween Horror Nights 25 starts this Friday, but we were able to attend their last dress rehearsal for a preview of what to expect inside the five Scare Zones. And if you won’t be able to attend HHN yourself, we also have the full Jack the Clown stage show

Since this was a “Advance Screaming” for Universal Orlando team members, it must be noted this was a technical dress rehearsal, and all of the effects may not have been active on the night of the preview. Also, keep in mind this event is intended for mature audiences, so are our videos of it.

The first Scare Zone you’ll come across if you head straight when you get in the park is Scary Tales – Screampunk. It’s full of fairy tale characters you may recognize such as Snow White, Cinderella, Pinocchio, Tin Man and others. But these aren’t the family friendly versions you know.

If you take a right when you get in the park, you’ll first encounter Icons – HHN. This Scare Zone is set up with small stages for many of the event’s past icons. It’s great for photos with them. There are also some icons and characters roaming the streets around the stages too. Keep an eye out, you may see one of the icons do a “live kill” on their stage.

Head into the New York area and you’ll enter what looks like a Halloween Block Party. Unfortunately (or fortunately for horror fans) a couple of sanitarium busses have crashed in the area, letting their patients loose. In Psychoscareapy – Unleashed, you’ll also see some small stage shows, such as a very weird costume contest:

You’ll find a drive-in movie theater, AKA All Nite Die-In – Double Feature in the San Francisco area of the park. Don’t come here expecting to watch a movie. The screen has seen better days. But movies are still playing. Depending on when you walk through, you may see classic monster and horror movies, and the characters come to life in black and white, just like their movies. Or you may see modern horror movies on the screen and characters such as Carrie or Chucky roaming the zone.

The last Scare Zone is on the path by the new NBC Media Center and it’s been transformed into Evil’s Roots. Many not so nice creatures have grown from the ground such as evil pumpkin men and moving vines. You’ll also see not so nice fairies and ogres (or are they trolls?).

In addition to all these Scare Zones, you’ll also encounter some roaming scareacters, most of them with chainsaws. We saw a prison gang and some other weirdos. But scariest of all were the evil clowns. We took caught a few on camera. They were at the front of the park when we first entered, then they went to The Simpsons Springfield area for the rest of the night.

We encourage you to skip the next video if you’re going to HHN this year and just watch The Carnage Returns with Jack the Clown and his girlfriend Chance in person. But if you can’t make it, or can’t wait, here’s the full show.

We also have a look in a new Halloween Horror Nights store full of merchandise for sale and props from former events. It’s in the Twister gift shop. Thanks to Mikey Monheit of Magic City Mayhem for the video:

Stay tuned as we bring you a report from opening night and video highlights inside a couple of the houses from Halloween Horror Nights at Universal Orlando and Universal Studios Hollywood.

UPDATE: Here our videos featuring highlights inside the Freddy Vs. Jason and Jack Presents 25 Years of Monsters and Mayhem houses:

‘From Dusk Till Dawn’ coming to Universal’s...