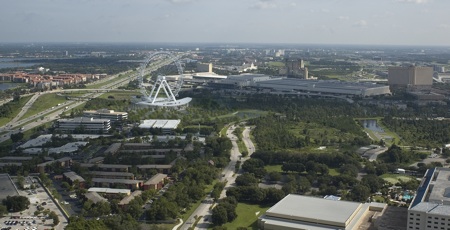 Plans for the Great Orlando Wheel, a 400-foot-tall observation wheel planned near the Orange County Convention Center, have been suspended.

The wheel was first announced last June and was planned to open in 2010. But when recently contacted about its progress, General Manager Wil Armstrong said “In the economic environment here and abroad, Great Orlando Wheel Corporation has decided to temporarily suspend the project. This temporary measure is designed to assure the success of the project in the long run.

“Great Orlando Wheel Corporation remains committed to Orlando and the Great Orlando Wheel. We are watching the current developments and waiting for the financial markets to stabilize before embarking on the next stage of this exciting project.”

The below video was released when the wheel was first announced.