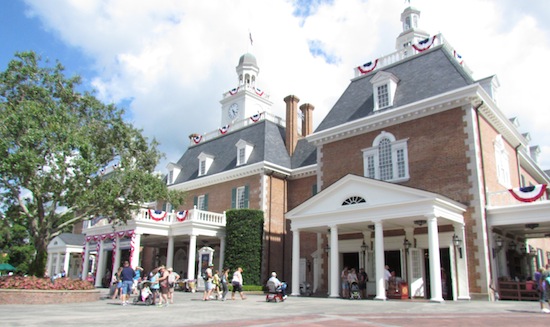 We are definitely not happy Disney World cast members at Epcot’s “The American Adventure” pavilion.

In the near future, we will (unfortunately) no longer portray “Colonial Gentlefolk” and represent hospitable residents of the magnificent Georgian mansion which houses the unique Epcot animatronic theater show known as “The American Adventure” because some Disney executive has decided to take away the appropriate period costumes from the cast members. This arbitrary change (after 30 years) seems like a misguided and ill-informed decision.

Instead, we Colonial Folks will wear modern suits and dresses closely resembling air-flight attendants. (Perhaps these uniforms were discarded from the failed Disney/ABC-TV series “Pan Am”?) Yes, the color combination will indeed project a red/white/blue USA color scheme, but the same color comment could also apply to France, Norway and the United Kingdom. Where is the distinct design and style? Current cast members who will be directly affected have negatively expressed their obvious displeasure by labeling the sketches of the proposed costume designs as “hideous” or by using the “thumbs-down” gesture in despair.

Gone will be the classic period theming and atmosphere which has always ranked as a distinguishing hallmark of the various Disney theme parks. Where’s the story, the living narrative, the character, the heritage, the culture, the attention to detail? The popular attraction’s official Operating Guide clearly states that three years of extensive research were used “… to obtain information as complete and as accurate as possible …” from historical experts, libraries and archival resources. Surely these modern uniforms will visually nullify the ambience which the original Disney Imagineers so carefully created and cultivated. Who will be next: the Fife and Drum Corps or the Voices of Liberty? 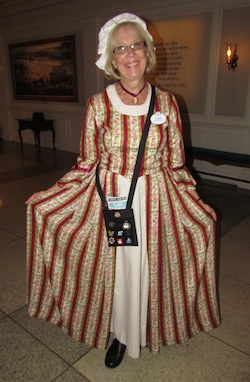 Ironically, in a recent edition of Orlando Attractions Magazine [Summer 2012, Volume 5, Issue 3] Richard Taylor (former vice president of Walt Disney World Entertainment and Costuming) makes this statement: “One of the main components of the Disney experience is the meticulous attention to details, often in places that the public don’t really notice. Costuming is one of those places, and it’s the costumes of all cast members that really themes the parks.” He then continues to detail how Walt Disney World’s Magic Kingdom was specifically constructed with utility corridors underground to solve the problem of cast members appearing in areas where their costumes didn’t fit, a situation which troubled Walt Disney himself at Disneyland. Won’t these contemporary costumes destory that illusion of definite time and place?

Through the years WDW guests have come to anticipate and appreciate the personal interaction and appearance of the appropriately dressed World Showcase countries inhabitants. One of the guests’ (as well as we cast members’) favorite frequent activities is to pose for souvenir photos with the attraction’s Colonial Folks. These picture opportunities seem especially important to visiting school groups and tourists from other nations. They often comment on how much they like or admire the historical-appearing clothing from America’s proud past. What guest will want to pose with a contemporary airline steward? What performance role will we now play if we don’t look the part? Will these new contemporary costumes create guest disappointment and dissatisfaction?

This whole modern costume sitaution at Epcot’s “The American Adventure” attraction seems so sad and pointless, particularly since nobody was consulted or surveyed, not even management. (If so much money readily exists in the current budget, new seat covers in the theater would have easily qualified as a much better project.) But for now, we cast members directly affected are not happy about our future portrayals at Epcot’s “The American Adventure” attraction. 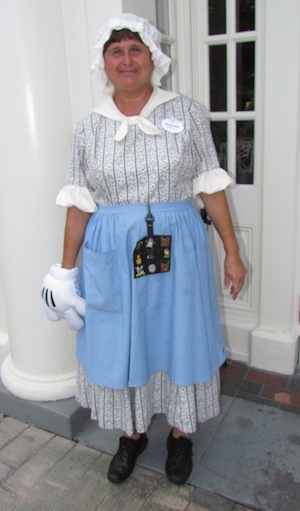