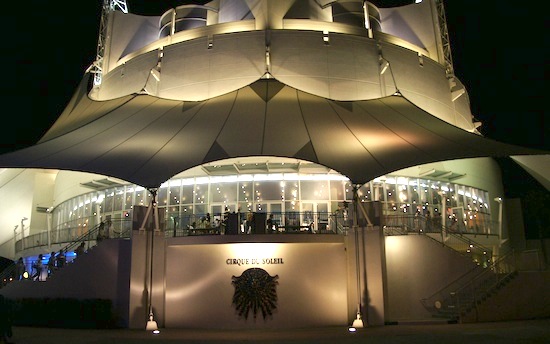 Cirque du Soleil, the Orlando Ballet and Downtown Disney teamed up on Monday night to present A Choreographers Showcase, which could also be nicknamed “Cirque du Ballet”.

The one-time-only performance was partly a fundraiser for the Orlando Ballet, and partly an opportunity for new talent to present artistic skill and new ideas in front of an audience that included scouts from theaters in Montreal, New York City and Las Vegas.

Actually, this concept began in 2006 in Las Vegas, when the Ballet company there teamed up with Cirque du Soleil for a similar fundraiser, now in its fourth year. The collaboration between the two companies has been a great learning experience for all.

Tonight’s debut in Orlando raised $10,125 for the Orlando Ballet. Tickets were very affordable, with prices ranging from $15 to 25. Downtown Disney donated the use of the theater, and it seemed to be about 90 percent full.

The show began with introductions, and then nine very different performances dazzled us. The show lasted just about an hour.

“Rythmsphere” lead the program with a celebration of African and Middle Eastern drums. A troup of seven danced to the drum beats, and two of the men also performed with jump ropes. Some of the jump rope tricks looked similar to jump rope tricks in La Nouba. These jump ropes may be the most visible evidence of tonight’s mashup between Ballet and Cirque du Soleil.

Rythmsphere also featured a solo dance by an agile young lady who had grace, charm, and was lighter on her feet than you would otherwise guess. Her flowing moves defied the stereotype she may be facing as the singer who has the final song in an opera. 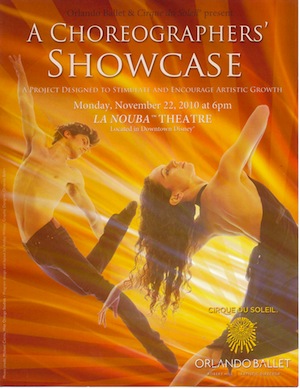 The next performance featured a very dramatic mood, and was my favorite of the evening. “La Esfera Azul” (The Blue Sphere) started with thunderclaps and strobe lights, revealing a woman in a purple dress with sections of blue and green cowering under a bench. Three dancers performed as a Greek chorus, more a less. They wore browned white dresses, almost like aged undergarments with paint spatters, and reflected various dramatic emotions and movements of the woman in the purple dress.

“Leda and the Swan” was probably the most ballet-like performance of the night. It was the story of Zeus disguising himself as a swan to be with the Queen of Sparta. Zeus was shirtless and wore a white wig of feathers – his disguise as a swan. Leda danced on her tippy toes, and Zeus raised her in the air in classic Ballet moves, sometimes while lying face up from the floor.

“Gaga” could easily be part of the top-notch stage entertainment of a Circuit Party. As the name suggests, the music was a mix of Lady Gaga hits. Two pair of men and women first appeared on stage in a mix of fog and strobe lights, wearing black swimwear or undergarments, police officer-type brimmed hats, veils and high heels. These were discarded as they proceeded to center stage and performed high energy dance numbers. It was easy to imagine this show in a Las Vegas production.

“Compliance” was something like a heated Flamenco dance. The man wore a white open shirt and white pants. The lady had an amazing dress, the kind you would see at the Oscars. The dress was flesh colored on the torso sides, with a long tall red front and back, as if the dress had just the two red panels and nothing connecting them on the torso sides. It was a stunning, complicated dance, and seemed to receive the greatest amount of applause of the evening.

“The Resistance” was a dance like you might find in a rock opera. A male performer in jeans and a white tattered shirt was conflicted between a choice of two things, represented by a lady in blue and a lady in red. The male would dance a bit with the lady in red, then with the lady in blue, as if evaluating two opposites. In the end, the ladies tore his shirt evenly in two as the spotlight hit him, and then went to black.

“Night Song” was perhaps the most like a traditional theater performance. A man and woman in blue evening attire – and masks – danced in a park setting, as an apparently homeless woman watched and admired them. Perhaps the homeless woman was reflecting on her life, in a younger day when she had money and someone who loved her. Eventually the homeless women lay down on the bench and expired. The couple in evening attire left the stage with sadness and regret, perhaps as lost memories, lost forever.

“Tension” started with a man and women wrapped together, but a short distance apart, in a long flowing white fabric. At various times they expressed frustration with each other, often with wide eyes and mouths, shaking their wide open fingers in parallel with the sides of their heads. The cloth unfurled and grew tight as they tugged in opposite directions. Then the lady cooperated with the man, releasing her end of the cloth to wrap him nearly entirely within it. This continued back and forth until both dropped the cloth in unison and ran off stage in opposite directions. Perhaps the cloth represented their relationship, what each expected and needed, and eventually it was a relationship that neither wanted.

The evening concluded with “Swing”. As the name implies, it was a 1940s tune, but with a mashup of tap dancing in ballet slippers! It featured all the classic tap dancing you would see in a theme park review show or in an old musical, in slippers! The dancing was top notch, but what an interesting twist.

For the curtain call, each set of performers for each of the nine performances came out to center stage for a bow. Many of the dancers had performed in two or more of the acts.

It was a very entertaining show. For $15, it was a pretty good deal. I’m planning to see next year’s fundraiser. This year’s was great!

PARKsaver: Shamu, Manta and Father Christmas can be enjoyed through deal at Renaissance Orlando

Apparently I am the only person in Orlando who was sorely disappointed by the performances on Monday evening. Considering that the event was promoted as a choreographers showcase – a project designed to stimulate and encourage artistic growth, I think it did neither.
I had hight hopes that the fusion of both companies would produce something never before seen in a theater but most of the dancing that I saw on Monday, I could see at any Dance Competition in America.
We all know that the dancers from Orlando Ballet can dance ballet exceptionally well and that the performers from Cirque can do fabulous tricks – I wanted to see something that pushed the dancers way out of their comfort zones and showed their abilities to adapt to other styles. Considering that they are all very much restricted creatively doing the same show night after night, whether it be the OB or CDS, I thought that giving the artists / choreographers creative freedom would result in something astounding but all I saw were dancers rehashing choreography that has all been done before. When I first heard of the collaboration, I was really excited and hopeful of seeing both art forms represented in a way that would break boundaries. Acts I had imagined such as silks combined with ballet- acts that would show off both art forms combined in such a way as to astound the audience and display the collaboration between the two companies.
Now dont get me wrong, Im not saying that the dancers were bad – there are obviously some very talented artists in both companies. The dancers in Night Song were beautiful but I could see the same thing if I had bought tickets to the Orlando Ballet Showcase. I was extremely disappointed by the choreography. I wanted to be wowed with something different and exciting. There was not one piece that impressed me with its originality or creative expression. And if I see one more routine with Fouette Turns where they shouldn’t be, I might scream. Original choroegraphy is not about doing tricks just to get a response from an audience who dont know any better. 10 year olds are doing the same thing in any dance studio, anywhere. Original choreography, especially when given the creative freedom of two exceptionally talented companies, should result in dance pieces that will stand the test of time and bring tears to the eyes of the beholder. I have seen more original stuff on So You Think You Can Dance.
Next year, please strive to think outside the box – there are people out there who will appreciate it way more than a few Fouette Turns.