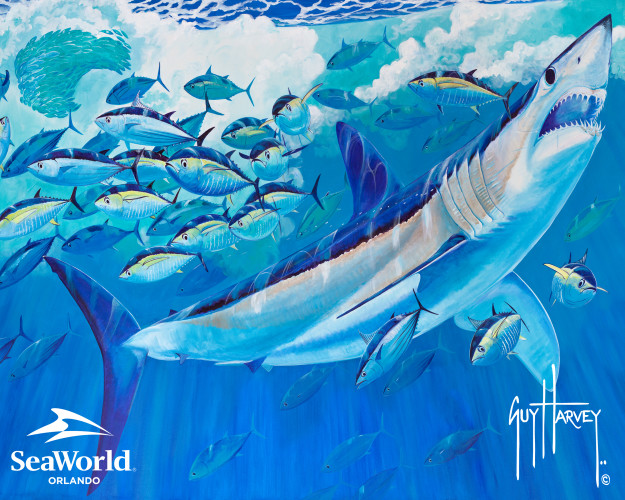 Artist/conservationist Guy Harvey is painting a giant mural at SeaWorld on May 23 & 24.

Guests at SeaWorld Orlando on May 23 and 24 will get a rare opportunity to witness a world-class artist in action, as renowned marine conservationist Guy Harvey paints a giant mural in the park’s new realm, Shark Wreck Reef.
The 16-foot by 24-foot original artwork, featuring a Mako shark, will join only a handful of murals created by the artist and will be a focal point in the heart of SeaWorld’s Orlando park. Opening June 10, Shark Wreck Reef blends education and thrills while immersing guests in an underwater world. Mako, Orlando’s tallest, fastest and longest roller coaster, is the centerpiece of the new realm.

Guy Harvey, perhaps best known for his wildly popular t-shirts depicting offshore and nearshore marine life, will also commission an array of exclusive paintings and apparel, which will be available only at SeaWorld. SeaWorld will donate a portion of the proceeds from the sale of such items directly to the Guy Harvey Ocean Foundation.