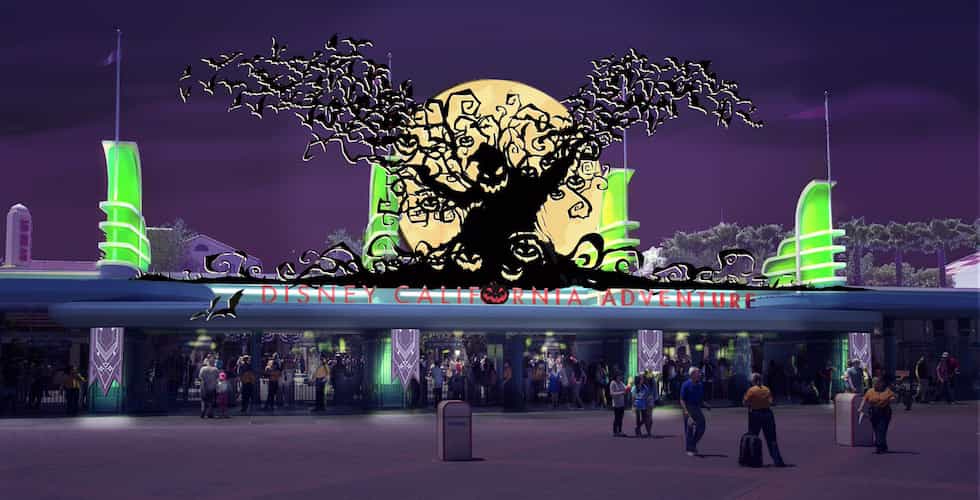 Halloween is coming to Disney California Adventure Park for the very first time, with some spooky fun in store for guests.

For the first time ever, Halloween will come to Disney California Adventure Park this year, transforming the entire park into a spooky wonderland.

Areas like Cars Land and Buena Vista Street will get the Halloween treatment with special decorations, and attractions like Guardians of the Galaxy – Mission: BREAKOUT! will get fun Halloween overlays. There will also be plenty of spooky merchandise, themed food and beverage offerings, and more.

The frightful fun begins as guests walk into Disney California Adventure, greeted by the silhouette of Oogie Boogie, the bug-infested boogeyman from “Tim Burton’s The Nightmare Before Christmas,” as it looms over the park’s entrance. Oogie Boogie himself will even release a swarm of bats into the park, sending them flying down Buena Vista Street, Cars Land and beyond. Guests can see the bats as they circle the Carthay Circle Theatre.

Your favorite Cars characters are getting in the spooky spirit as Radiator Springs celebrates “Haul-O-Ween.” Scary the “Scare-car” will greet guests at the land entrance for a special photo opportunity, and each of the Cars will have their locations decorated for the Halloween season. Sarge will display his “pump-kins,” Fillmore will showcase his Jack-Oil-Lanterns and frightening folk art, and Flo’s V8 Cafe will be covered in Spider-Car webs.

Two of the attractions in Cars Land will also see a spooky transformation, as Mater’s Junkyard Jamboree becomes Mater’s Graveyard JamBOOree with spooky new songs; and Luigi’s Rollickin’ Roadsters will become Luigi’s Honkin’ Haul-O-Ween, where the cugini will dance to songs like the “Terror-antella,” “The Chop Top of Carsoli” and more.

The Cars will also be dressed up in their Halloween “car-stumes” as they greet guests, with Mater in a “van-pire” outfit, Lightning McQueen as a super hero, Red the Fire Truck as a clown, Cruz Ramirez as a pirate, and DJ as a punk rocker.

Guardians of the Galaxy – Monsters After Dark

Guests will be wary as they enter the Lobby of the Fortress, with flashing alarms, sounds and warning signs that creatures have escaped their vitrines (glass cages). The Collector’s assistant, Apheta, will try to reassure guests that nothing is wrong and that there is just a momentary setback.

This themed overlay will also include an all-new 1970s punk rock-style song, “Monsters After Dark,” composed by Tyler Bates, who composed the music for the “Guardians” films.

Guests can enjoy Halloween decorations in the store windows along Buena Vista street, and even see a 10-foot-tall statue of the Headless Horseman in Carthay Circle. New background music themed to the season will be played through the street to help set the eerie mood.

Mickey Mouse and friends will also join in special meet-and-greets in their Halloween best – Mickey as a bat, Daisy Duck as a witch, and Goofy as a ghost.

Delicious themed fare available throughout Disney California Adventure will include:

This year, Disney California Adventure Park will be a part of the mix-in for Mickey’s Halloween Party in Disneyland, the annual separate-ticket event that will feature special entertainment, trick-or-treating and characters in their Halloween costumes. Guests with tickets to the party will be able to enjoy Disney California Adventure and Disneyland three hours prior to the beginning of the party.

To purchase tickets to Mickey’s Halloween Party, and for more information on Halloween at Disneyland Resort, visit disneyland.com/Halloween.