written by Tharin White September 25, 2018
Each week, we ask you, our readers, to vote for your favorite food, ride, land, or activity at theme parks around the world. This week, we’re at Universal Studios Florida for your favorite Halloween Horror Night 28 House. 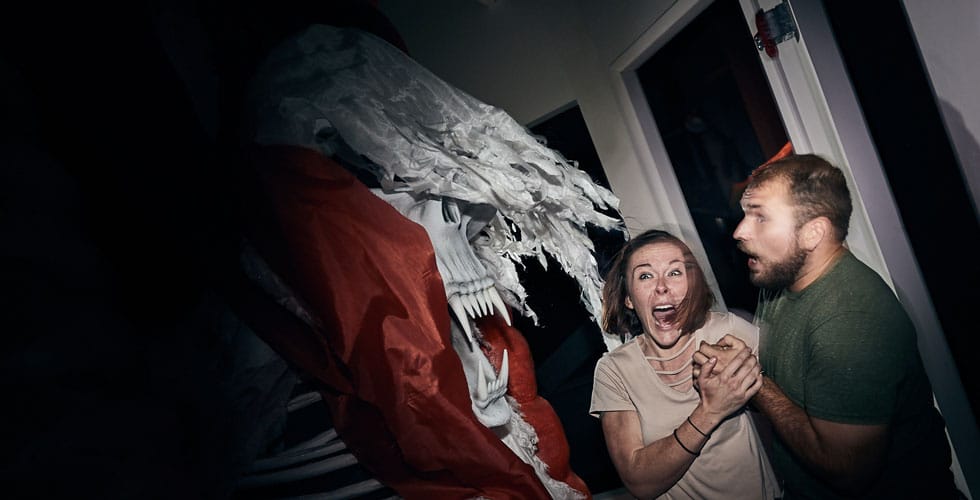 In this original story, a cataclysmic meteor has struck Earth, causing humans to become extinct, and something monstrous to take root. The virulent growth has swept across the planet, covering everything and choking out civilization within moments, creating a tableau of what once was. What appears to be a lush and green graveyard hides the most terrifying and hungry meat eaters. Predatory plants of all species use strangling vines, razor-sharp thorns, and poisonous pollens to encroach from all sides as you invade this new world.

Writer’s Review: “Seeds of Extinction takes you to a place that Halloween Horror Nights hasn’t explored in a while, and does it beautifully. The plant life surrounds you in a blood-thirsty garden of your own torture. Be prepared for strong wind and water effects, which greatly enhances the scares!”

Darren (@BizzarLo12 on Twitter): “Seeds of Extinction. It’s just so creative and unique.”

It’s showtime at the local drive-in. As you approach, you’ll see movie trailers of what you’re about to witness, filling you with dread as you make your way inside. The smell of popcorn will be first to hit your senses as you find yourself in a movie theater snack bar. But from there, it’s all downhill for this double-feature. In one film, you’ll be hunted by werewolf bikers. In another, you’ll come across a bloody, gut-strewn pumpkin patch. You’ll find yourself screaming through this sinister sinema as you try to avoid becoming the snack of alien cannibals, creatures with tons of teeth and a ravenous swamp yeti. Yes, you read that right.

Writer’s Review: “Slaughter Sinema is my favorite house this year! The smells, sounds, and sights all come together for a wildly scary time. And of course, the swamp yeti! What a serious, scare-you-to-your-core, sight to behold.”

You’ll faithfully follow the storyline, starting off in Mirkwood and then quickly moving to inside Hawkins National Laboratory where things have gone terribly, terribly wrong. From there you will experience all the most memorable moments and environments from the show while being hunted at every turn by the Demogorgon. And of course, you’ll step into the mysterious darkness of the Upside Down, more than once.

Writer’s Review: “If you have ever wanted to fully step in to the world of Stranger Things, look no farther. Every single detail perfectly matches the show, with extensive research done for the scareactors and laboratory. If you are a fan of Demogorgons, you will certainly get your fill of frights from these creatures as they haunt you around every turn.”

The original Dead Exposure haunted house shook guests to their core. Easily one of the most terrifying haunted houses we’ve ever had. You entered complete darkness with only bright flashes revealing the zombie horde surrounding you. We’re bringing back that same terror. But this time, we’re dropping you in the middle of Paris in 1982. The city of lights has gone dark as chaos spreads, unchecked. Hordes of vicious, flesh-eating undead are swarming the streets. You’ll be lost in the darkness as the undead hunt you. An attack can come from anywhere. You don’t have to remember the original haunted house, to understand this single truth: They will find you.

Writer’s Review: “I was very curious to see how the Halloween Horror Nights team would pull off the effect of blindness in a haunted house that requires constant movement. But, they did it! Complete blackout, combined with fast strobes and sudden zombie attacks, culminates for the scariest house of the year.”

With more than 70% of the total votes, Poltergeist is a clear winner. Prepare to cross over as Metro Goldwyn Mayer Pictures’ 1982 supernatural horror film Poltergeist becomes reality in a new haunted house. The maggot steak, the giant mantis-like creature, the giant skull in the closet, and the clown. You will be walking into this iconic horror film with fan favorite moments, and then being guided into the bright and terrifying light.

Writer’s Review: “Every year I get more wrapped in the horror culture, all thanks to Halloween Horror Nights. I have watched many of the classic films, solely to know what I was stepping into when I entered that year’s house. After experiencing the Poltergeist house, the film shot to the top of my list for must sees. This is by far one of the most creative houses I have ever gone through. The scares are everywhere, and they are incredibly diverse. Huge puppets, scareactors all around you, special effects and more! This house deserves its first place win!”

Andrew (@DavisManor on Twitter): “Poltergeist, the scariest and best IP I have seen @HorrorNightsORL do in a long time… if ever!”

Our readers and viewers are some of the most knowledgeable theme park fans and experts out there, and thanks to their votes, we have our top five Halloween Horror Nights Houses. Be sure to follow us on Facebook, Twitter, and Instagram to share your voice in our next poll.