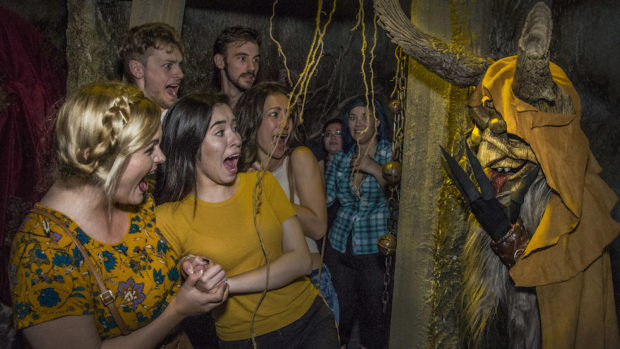 Halloween Horror Nights 26 is now officially underway at Universal Orlando Resort, and you won’t stand a Chance as the twisted right-hand woman of Jack the Clown steps into the spotlight.

For 31 select nights through Oct. 31, guests can experience theme park thrills by day and become victims of their own horror film by night at Halloween Horror Nights.

Nightmares come to life in nine haunted houses based on some of the biggest legends in pop culture. Guests will:

• Become the next doomed residents of Murder House, tortured performers in the twisted Freak Show, and victims of the otherworldly, death-dealing Hotel from FX’s anthology show “American Horror Story”
• Desperately try to escape Leatherface’s lethal chain saw in “The Texas Chain Saw Massacre”
• See, hear, feel – and even smell – every levitating, head-spinning, vomit-wrenching, skin-crawling moment from “The Exorcist”
• Fight to survive the return of masked killer Michael Myers in “Halloween II”
• Fend off packs of flesh-hungry walkers in scenes from Seasons 1 through 6 of AMC’s “The Walking Dead”
• Encounter the evil ancient spirit of the dark shadow of Saint Nicholas in “Krampus”
• Step inside the minds behind the annual Halloween event in three haunted houses based on original stories – Lunatics Playground 3D: You Won’t Stand A Chance, Ghost Town: The Curse of Lightning Gulch, and Tomb of the Ancients

Beginning Sept. 29, guests can witness a whole new generation of psychological horror with a brand-new entertainment experience – The Repository. A blend of custom virtual reality technology, real-life characters, immersive storytelling and intensely-themed environments, this exclusive experience will terrify, thrill and amaze like never before. This highly interactive horror experience can be purchased for $49.99 per person, by calling 407-224-7840. Halloween Horror Nights admission is also required.

For more information, visit HalloweenHorrorNights.com/Orlando. Take a look below at all of our videos from this year’s event so far, and watch the Sept. 22, 2016 episode of Attractions Magazine: The Show for more coverage.

Disney to livestream ‘Fantasy in the Sky...