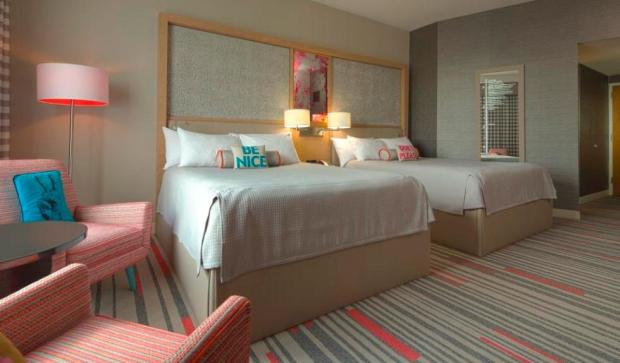 Guests staying at the Hard Rock Hotel are in for a rockin’ update to their rooms.

Inspired by music and the hotel’s on-site location at Universal Orlando Resort, the renovated guest rooms at Hard Rock Hotel are said to capture the vibe of rock against a backdrop of clean and contemporary surfaces. The new look features a mix of retro-inspired shapes, patterns and colors paired with sleek-lined details in the place where Hotel California became a reality.

“We are excited to reveal a totally new and distinctive look for our guest rooms and corridors,” says Managing Director Carlton Hudson. “Guests are already telling us the transformation is off the charts.” Check out the total transformation of one room from start to finish in a time-lapse video below:

Rock fashion inspired the patterned headboard in the bedroom and the tufted wall covering at the vanity. The etched mirror at the headboard features an oversized peace symbol, while the wall mirror features the heights of famous musicians, offering guests of all ages the chance to see which celebrity is their same height.

Artwork in the new rooms takes literal components of music such as drumsticks and speakers and turns them into multi-colored graphic expressions in the space. The contrast of subtle retro nods and modern execution creates a space that is relevant, inspired and fun. Accents of hot raspberry are used in the corridors while the guest rooms feature a palette of cool gray and light cream with pops of color.

For more information or to book a stay at Hard Rock Hotel at Universal Orlando, visit HardRockHotelOrlando.com.

‘Today Show’ to broadcast from Universal Orlando May 29; Pitbull will perform