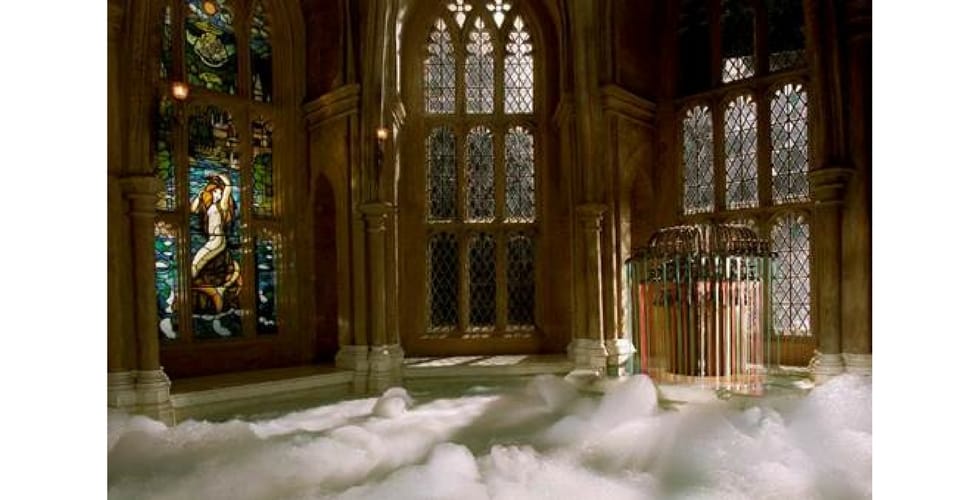 The Warner Bros. Studio Tour London is hosting a feature dedicated to “Harry Potter and the Goblet of Fire” starting this March.

Starting this Easter season, guests can discover the behind-the-scenes secrets of “Harry Potter and the Goblet of Fire” as Warner Bros. Studio Tour London hosts a special feature dedicated to the film.

As part of the exhibit, the Goblet of Fire will return to the Great Hall for the first time since filming wrapped in 2010. Every visitor to the Great Hall set will get to see a live special effects demonstration showing how the Triwizard Champions’ names were shot out of the Goblet, and even receive a souvenir parchment with their name to memorialize the experience.

During filming, two versions of the Goblet were created for different purposes. The original Goblet was hand-carved by the film’s Head Propmaker, Pierre Bohanna, from a single piece of wood chosen for its knots, twists and splits to give the Goblet an ancient, organic look.

A mould of this was then made for the Special Effects version that was rigged to shoot out the parchments of the four Triwizard Champions. Visitors to the Studio Tour will get to see both versions of the Goblet close-up as part of the feature.

Fans of the fourth Harry Potter film will remember the Prefect’s Bathroom scene where Cedric Diggory advises Harry to submerge his egg underwater that he received in the first Triwizard Challenge. Starting on March 30, the Prefects’ Bathroom taps will be displayed, complete with multicolored running water from each of the 53 spouts. These taps, created by award-winning Special Effects Supervisor, John Richardson, were cast in bronze to give them durability and strength while being used on set.

Guests visiting the Studio Tour will also get to see how Voldemort’s simple costume was used to show both his vulnerability and strength throughout the films. Many new props and costumes from the Triwizard Tournament will also be on display during the feature, including the boot Portkey that Harry, Hermione and the Weasleys used at the 422nd Quidditch World Cup.

Tom Riddle’s grave will also be on display in the Studio Tour, offering guests a 360-degree view of the sculpture and a perfect photo opportunity for fans of the Dark Arts. The sculpture was created before the details of Voldemort’s family history were known, so the dates on the gravestone had to be changed in post-production.

As a final update to the Studio Tour for this new feature, an addition to the Hogwarts Castle model will include a scale version of the Beauxbatons carriage with winged horses as it prepares to land on the grounds ahead of the Triwizard Tournament.

The Warner Bros. Studio Tour’s Goblet of Fire feature will run from Friday, March 30 – Sunday, Sept. 23, and is included with admission to the tour.

For more information on the Warner Bros. Studio Tour London and The Making of Harry Potter, visit wbstudiotour.co.uk.

Dance with DJs Dimitri Vegas & Like Mike, Robin Schulz and Afrojack during Electroland 2018 at Disneyland Paris