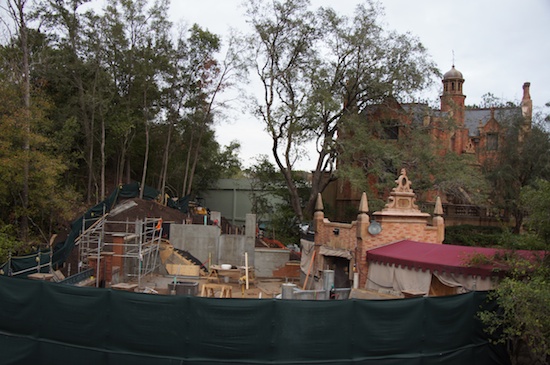 Something sort of weird, but definitely interested is going on outside the Haunted Mansion at Disney’s Magic Kingdom. Construction walls have been up for a while just outside the entrance. Guests can no longer laugh at the gravestones or freak out at blinking stone faces. But they may soon be able to do a whole lot more while waiting to enter the happy haunt.

Although Disney will only say they’re making enhancements to the queue. The construction so far shows some elaborate enhancements. Most are guessing the Haunted Mansion will follow in the footsteps of Soarin’, Space Mountain and The Many Adventures of Winnie the Pooh. Each of the queues for those rides have been enhanced with interactive features to ease the boredom of those waiting in line.

Last April, Disney Imagineers set up a temporary “play test” in the queue area of the Mansion for a couple of days. The test had guests guessing where the family fortune of the deceased Dread family was buried. Each family member would whisper clues as you passed by. But just because that’s the game they were testing, doesn’t mean that’s what they’re adding now. 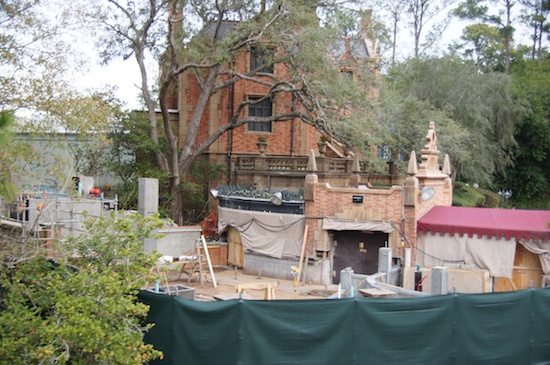 From this photo, it seems like guests may enter this new area, go by the new elements then exit back out by the entrance to the Mansion. It may be set up similar to the area at Winnie the Pooh, where guests can enter the interactive area if they’d like then come back in line, or just stay in line. 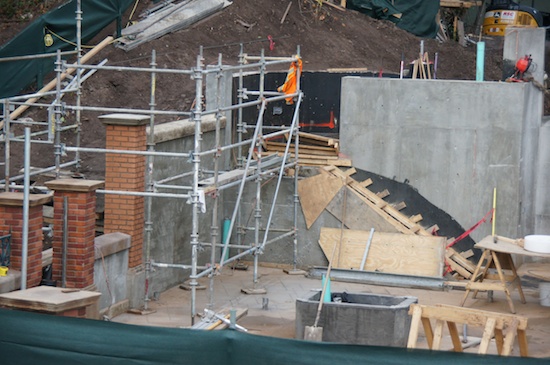 It’s hard to tell, but this sort of looks like a stairway being built up to the graveyard hill. We hope the former graves will find a home in the new queue.

Be sure to watch the Feb. 10, 2011 episode of Orlando Attractions Magazine – The Show for video of the construction area. Don’t worry, we always keep an eye on all the ghostly happening at the Haunted Mansion.

I hope they’re not going to add stupid video games to the line cue, Disney is about imagination not an arcade for unimaginative kids who can’t focus for two seconds. I would rather see an enhance graveyard where the tombstones react to the quests using other stimulous.

I am happy they are adding to the Haunted Mansion which is my favorite attraction. Regarding the above statement referring to unimaginative kids…. You must have Disney confused with a school or museum. We go to Disney to have fun. Maybe you should spend more time with your kids & stop expecting TV & theme parks to teach & “stimulate” your kids!

Listen to David we must. Wisdom he has.

ummm, spend $80 to go play videogames, time better spent getting caught up in the “magic” and being transported to another world, I would think. just like putting the video on spaceship earth, the animatronics and special FX are better.

they might be adding that to film the new 3D haunted mansion movie there.

Hello, i think that i saw you visited my web site so i came to “return the favor”.I’m trying to find things to improve my site!I suppose its ok to use some of your ideas!!