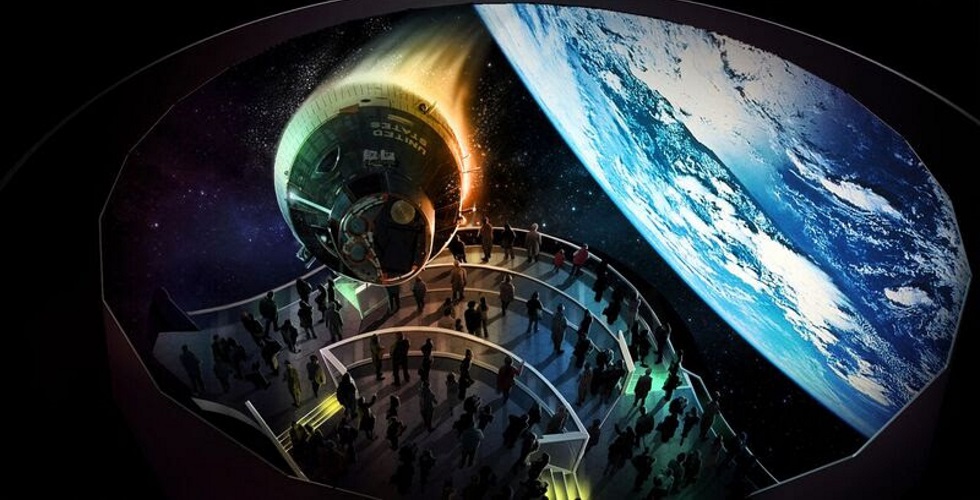 Heroes and Legends will be presented in an immersive 360 degree theater.

Guests of the Kennedy Space Center Visitor Complex in Florida will soon be greeted with a dramatic sense of arrival when the new Heroes & Legends exhibit, featuring the U.S. Astronaut Hall of Fame, opens on Nov. 11.

Positioned just inside the entrance, the attraction will set the stage for a richer park experience by providing the emotional background and context for space exploration and the legendary men and women who pioneered our journey into space.

Through engaging storytelling, guests will embark on an awe-inspiring journey that begins with an immersive exhibit designed to spark thought and discussion about how society defines a hero. Then, through cutting-edge technology, interactive elements and exhibits, visitors will be introduced to the heroes of the NASA space program: the pioneers who worked together to make space exploration possible.

“We’ve been focusing on a story to create what we consider a ‘launch pad’ for our visitors that really sets the stage for their full-day experience here,” said Therrin Protze, chief operating officer, Kennedy Space Center Visitor Complex. “The opportunity to learn about the amazing attributes of our heroes behind the transformative and historical events that have shaped the way we look at space, the world and the future, will not only entertain and inspire guests, but lay the groundwork for their interactions throughout the rest of the visitor complex with our other attractions and space experiences. We are here to inspire minds through a memorable space experience and this new attraction will be a phenomenal introduction.”

Designed by Falcon’s Treehouse, a design firm based in Orlando, the architecture and sweeping ramp entrance will simulate the journey to the stars, featuring a slingshot maneuver through the Rocket Garden. The deliberate architectural design for the new building is meant to celebrate spacecraft throughout history and into the future.

Separated into three distinct experiences, plus the Astronaut Hall of Fame, Heroes & Legends will offer:

• A 360-degree discovery bay, where guests will explore how society defines heroism from a diverse group of people who explore what is at the heart of this journey: What is a hero, who are the heroes of our time and what does it take to be a hero?  During the seven-minute presentation, the historic beginning of the space race is acknowledged as the impetus for America’s push to the stars in NASA’s early years and the rivalry between the United States and the Soviet Union during the Cold War.

• A custom-built theater featuring a multi-sensory experience during which guests will vicariously join NASA’s heroes and legends on the most perilous stages of their adventures. Choreographed lighting and special effects such as fog, mist, water spray and wind will be enhanced by intense, deeply resonant sound effects and surrounding images to create the sensation of being “in the moment.” The seven and a half minute show takes guests on a journey with four space-age heroes to fully immerse them in the awe, excitement and dangers of the first crewed space program missions.

• An interactive exhibit floor taps into holograms and radical augmented reality to change the way that visitors interact with astronaut memorabilia and space program artifacts. A collection of nine exhibit modules will describe attributes of a hero – tenacious, passionate, disciplined and so on – while discovering more about NASA’s astronauts as told through their own experiences enhanced with memorabilia from the astronaut or the space program. Interactive features inspire further exploration of the original Mercury Mission Control room consoles with a periodic flashback to the tense moments preceding the landing of Freedom 7 by astronaut Alan Shepard, and the Sigma 7 Mercury spacecraft as a space-suited Wally Schirra climbs into the tiny spacecraft.

• The culminating exhibit of Heroes & Legends will be the U.S. Astronaut Hall of Fame. Housed in a majestic rotunda, the exhibit connects the visitor to each of the nearly 100 astronaut inductees through the use of state-of-the-art interactive technology. A signature element of the experience will be the ability to capture a memento of their journey: a special photo opportunity that allows the guests to pose with some of the featured heroes and legends.

The goal is for visitors to leave both attractions with a renewed sense of pride and a more in-depth understanding and appreciation of the qualities of heroism represented by NASA’s pioneering astronauts, and why they deserve our admiration and respect.

Heroes come from all walks of life, and Kennedy Space Center Visitor Complex wants everyone to get involved in sharing what heroism means to them. In ways both big and small, heroes make an unforgettable impact – and change the world for the better. The public is invited to submit a video for possible inclusion in the Heroes & Legends attraction by posting video on a social media platform (Twitter, Facebook, Instagram) using the hashtag #KSCHero. Follow the guidelines for Who is Your Hero? video submissions here.

For more information or to book a visit, go to KennedySpaceCenter.com.

A look at the Shuttle Launch from...