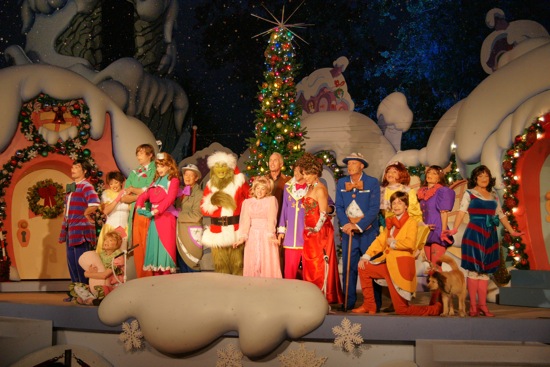 At Islands of Adventure, The Grinch and The Whos from Whoville will sing their hearts out about the true meaning of Christmas in the park’s special holiday Grinchmas show – featuring music specially created by holiday music sensation Mannheim Steamroller.

Just one park over, guests will line the streets of Universal Studios to see the larger than life Macy’s balloons and floats that make up the Macy’s Holiday Parade along with special performances by marching bands from across the country.

It’s the holidays at Universal – and Grinchmas, the Macy’s Holiday Parade and other special events will run from Dec. 6 through Jan. 1.

Universal will kick off the holiday season this year with live performances by Christmas music mega-sensation Mannheim Steamroller, who will perform two live concerts at Universal Studios on Saturday, Dece. 6. The Grammy Award-winning, platinum-selling group will play songs created specifically for the resort’s original holiday stage show How the Grinch Stole Christmas, as well as brand-new music from their newly released album Christmasville. Founder Chip Davis will join Mannheim Steamroller in his only scheduled appearance of the holiday season.

“We are extremely excited to partner with Universal Orlando Resort for their holiday celebration,” said Chip Davis, founder of Mannheim Steamroller. “We are looking forward to performing some of our classic hits, as well as new material, for park guests.”

The concerts will take place at 6 and 8 p.m. in the New York area and are included in park admission to Universal Studios.

At Islands of Advenure, the popular Dr. Seuss book How the Grinch Stole Christmas is brought to life in Grinchmas, a live stage show featuring an original musical score by Mannheim Steamroller. During the show, six songs are performed by a live cast, including The Grinch and The Whos from Whoville. As a part of the Grinchmas celebration, guests will also have the opportunity to meet The Grinch.

Next door at Universal Studios, the world-renowned balloons and floats from Macy’s Thanksgiving Day Parade return. Guests can experience the excitement of the New York City tradition as the Macy’s Holiday Parade cruises through the streets of the park. In addition to the parade, guests can enjoy performances by marching bands from across the country, a nightly Christmas tree lighting, as well as specially themed holiday shows including The Blues Brothers, Woody Woodpecker’s Kidzone and Barney.

“With the heart-warming story of Grinchmas and the excitement of the Macy’s Holiday Parade, we have brought together two of the most beloved and compelling holiday experiences in our culture,” said Jim Timon, senior vice president of entertainment for Universal Orlando Resort.

The celebration continues at Universal Orlando’s three on-site hotels – Loews Portofino Bay Hotel, Hard Rock Hotel and Loews Royal Pacific Resort – all of which will glisten with holiday decorations. Hotel guests will be immersed in the spirit of the season with carolers, tree-lighting ceremonies, holiday movie presentations and special holiday menus.

Visit the current Cypress Gardens for the last time for $10

Video of nighttime Space Shuttle launch, as seen from Orlando

The Spirit of Christmas returns to The...