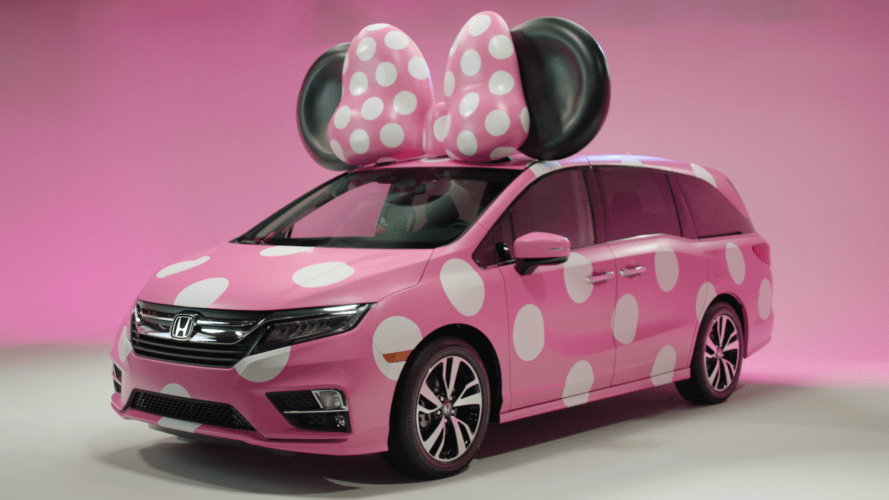 The one-of-a-kind Honda Minnie Van is on display at D23.

Inspired by the magic of Disney and the iconic character Minnie Mouse, Honda has created the Minnie Van for display at the 2017 D23 Expo. The Minnie Van is a one-of-a-kind, pink-polka dot design inspired 2018 Honda Odyssey minivan. It was built to celebrate Honda’s partnership with Disney-ABC and the “Disney Unlock the Magic Sweepstakes,” which you enter now at Disney.com/unlockthemagic.

Watch this video for a look at the new Honda Minnie Van:

“The all-new Odyssey was developed for modern families offering high-tech features, flexible seating and new styling, all aimed at keeping everyone in the family happy,” said Susie Rossick, Assistant Vice President of Honda Marketing. “In creating the Minnie Van that will be on display at the D23 Expo, we’re proud to partner with Disney-ABC and be inspired by the style of the most fashionable gal around – Minnie Mouse.”

The Minnie Van is a unique collaboration between Honda and Disney-ABC to create a one-of-a-kind minivan inspired by Minnie Mouse. For this exclusive display, one all-new Honda Odyssey was transformed through a pink-polka dot design inspired by Minnie’s iconic style, including her oversized bow and highly recognizable ears perched atop the vehicle. The Minnie Van will be on display for fans July 14-16 at the D23 Expo 2017 in Anaheim, Calif. The Minnie Van will be a part of the “Minnie’s Style: The Fashion House of Minnie Mouse” display presented by the all-new Odyssey, showcasing a selection of Minnie’s iconic dresses and accessories from throughout the years. Attendees may register at the Honda display to have their photo taken with the Minnie Van, and receive a special keepsake.

Note that the Minnie Van will be for display only, and is not be for sale. 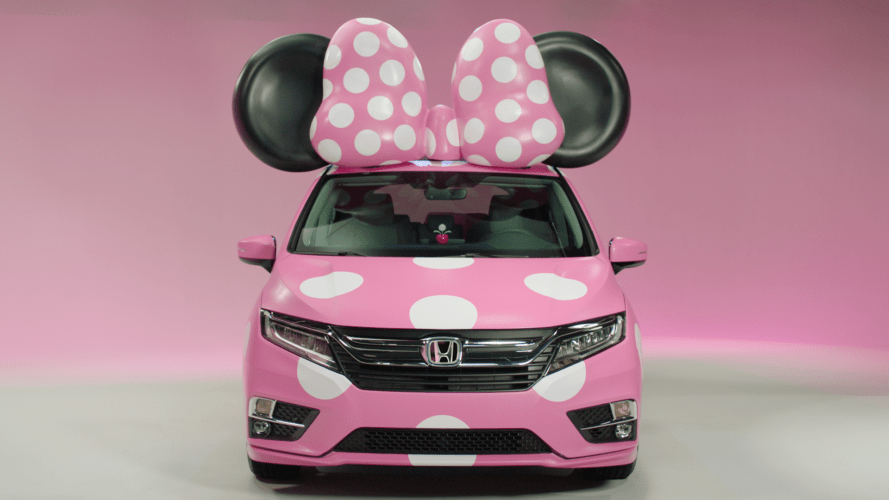 Honda’s partnership with Disney-ABC also features the “Disney Unlock the Magic Sweepstakes,” with one winner receiving a grand prize vacation to Disneyland Resort, plus an all-new 2018 Honda Odyssey. Honda has a long-standing alliance with the Disneyland Resort which began in 2005, with Honda’s sponsorship of Disneyland Park’s fireworks, Grad Nite events and an exhibit in Tomorrowland that featured ASIMO, the world’s most advanced humanoid robot. The partnership also includes sponsorship of the Disneyland Resort Autopia attraction, which dates back to the opening day of Disneyland Park in 1955, and allows guests to get behind the wheel of a car and cruise on a winding road trip. Honda’s sponsorship of Autopia is “Honda powered” and includes an update to the attraction’s look and storyline that went into effect in 2016.

Watch this video for a ride on Disneyland’s Honda-sponsored Autopia attraction:

Honda teams up with Disneyland for an ‘Enchanted...

Minnie Van service expanding to the airport for...

Movie Review: ‘Beauty and the Beast’ is...