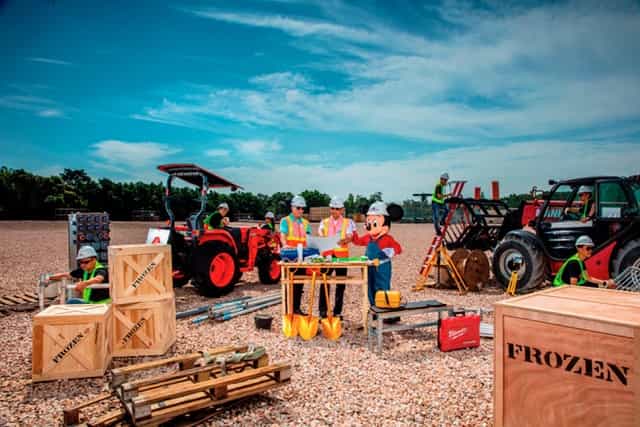 On Oct. 13, Hong Kong Disneyland Resort officially began construction on new attractions that will bring Moana, Frozen, and Marvel characters to the park over the next the six years.

Under the expansion plan, new themed areas, attractions and entertainment will launch at Hong Kong Disneyland almost every year from 2018 through 2023. The first attraction to open under the multi-year expansion project will be a Moana-themed entertainment venue in Adventureland. The new venue will feature a stage show starring Moana, as well as a meet-and-greet with the animated character.

Future expansions include:
• A brand new experience featuring Ant-Man, The Wasp and S.H.I.E.L.D. will be launched in Tomorrowland. The new ride will replace the Buzz Lightyear shooting ride, and join the recently opened Iron Man attraction as part of an entire Marvel-themed area.
• An all-new, immersive Frozen-themed area where guests will experience the characters and stories from the film in amazing ways. Guests can visit the Frozen area to enjoy new attractions including meeting the royal sisters Elsa and Anna.
• As the park’s centerpiece, the castle will be transformed to pay tribute to all of the Disney Princesses. The transformed castle will also feature a new daytime show and nighttime spectacular.

“We are thrilled to create amazing first-of-a-kind experiences based on some of Disney’s best brands, including Marvel and Frozen, here at Hong Kong Disneyland Resort,” said Samuel Lau, executive vice president and managing director of the resort. “Marvel and Frozen are popular with guests across our Asian markets. The new expansion will greatly enhance the appeal of HKDL to guests of all ages and genders in the region. It will give guests new reasons to travel to the resort and this amazing city.”

Lau, along with Howard Brown, general manager and regional executive of Walt Disney Imagineering Asia, and Mickey Mouse joined in on a special moment to mark the beginning of work for the multi-year expansion.

For information on the Hong Kong Disneyland Resort, visit hongkongdisneyland.com or call (852) 3550-3388, and watch our videos from the park: