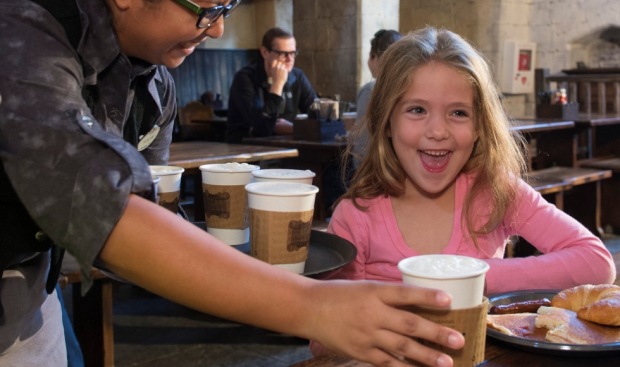 Butterbeer is very popular with guests visiting Universal Orlando, coming in cold, frozen and even ice cream offerings. But now there’s an option perfect for the Winter season.

Universal Orlando Resort is now offering hot Butterbeer at The Wizarding World of Harry Potter. To celebrate this new addition, some of the first guests at Leaky Cauldron in Diagon Alley and Three Broomsticks in Hogsmeade were surprised with complimentary cups of the new drink.

Hot Butterbeer is a smooth, hot beverage reminiscent of shortbread and butterscotch served year-round with a whipped topping. In Diagon Alley, it will be served at Leaky Cauldron, The Hopping Pot, and The Fountain of Fair Fortune. In Hogsmeade, it will be available at Three Broomsticks and Hog’s Head Pub.

Universal did a limited test run of hot Butterbeer during the first Celebration of Harry Potter in early January with lots of guests reacting positively on social media.

Since the opening of The Wizarding World of Harry Potter – Hogsmeade in June 2010, millions of Butterbeers have been sold each year at Universal Orlando. It has quickly become a guest favorite and appears as a popular drink in the Harry Potter books and films.