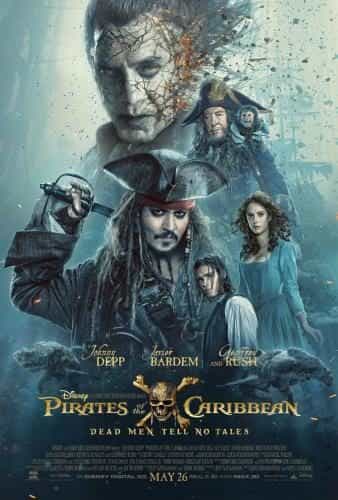 “Pirates of the Caribbean: Dead Men Tell No Tales” comes at a time when the Pirates franchise needs it the most. The fifth installment of the Pirates films follows 2011’s “On Stranger Tides” (still to this date the most expensive film ever made) where our characters diverted from the films’ developing story to search for the Fountain of Youth. After the movie resulted in mixed reviews, Disney is diving headfirst into the original story and picking up where we left off in “At World’s End”. With a new directing team, new characters, and even more envelope-pushing special effects, “Dead Men Tell No Tales” defies the odds to bring the sequel fans have been waiting for.

Since the beginning, no one knew if the idea of a movie based off a theme park ride was going to be successful – not even producer Jerry Bruckheimer himself. When asked if he knew it would be one of Disney’s most successful franchises, he remarked, “I didn’t. I thought it was going to end my career. They had the script and said we want you to do this, and I read the script and it was an OK script, but it was a by-the-numbers pirate movie, which hadn’t been very successful since Errol Flynn.” It took the writing team of Ted Elliott and Terry Rossio to add the supernatural elements of the pirates turning into skeletons in the moonlight to really get Bruckheimer behind a movie he believed people would see. 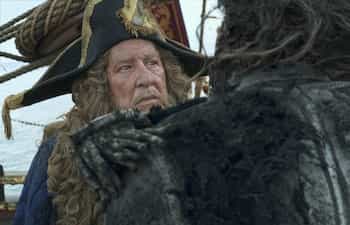 The nefarious, and now absurdly wealthy, Capt. Hector Barbossa returns as what Australian actor Geoffrey Rush refers to as a “corporate CEO.” It’s impossible to think about the franchise without Rush’s portrayal of Sparrow’s better half, however because of prior commitments and fear the movie may not be successful, we almost didn’t get to see Rush in this iconic role. He said, “Everyone had sort of poo-poo’d the idea of a pirate movie because I think it had been half a century since there has been a proper one. I remember writing a four-page A4 e-mail to my agent and it was titled something like ‘I hope you have a strong cup of coffee and you’re sitting down.’” Fortunately for fans across the world, Rush’s agent replied with a 10-page e-mail persuading him to take the role, resulting in a Shakespearean-esque performance to balance out Depp’s eccentric, clumsy characterization of Sparrow. It earned him an Oscar nomination.

“Dead Men Tell No Tales” also takes a chance by bringing on the upcoming Norwegian directing team Joachim Rønning and Espen Sandberg, whose previous work includes the Netflix original series “Marco Polo.” Newbies to the franchise, and blockbuster production, the directors came up with the daunting mission to give Jack Sparrow a backstory. “Jack doesn’t really have a character arc. He doesn’t learn a thing. We wanted to explore him, too, so that’s why we created the backstory. That’s something that we brought because we were curious about that. How did Jack become Jack Sparrow? We tell this story about what’s really the treasure, even for a pirate.”

Bruckheimer also chimed in on how this was also a huge but important risk for the franchise given Sparrow’s history, “What’s so interesting in Hollywood and literature, you talk about character arcs. Not with Jack Sparrow. He’s got no arc and that’s a no-no. You sit in these development meetings and they ask ‘What’s the character’s arc?’ None!”

The dazzling visual effects in “Dead Men Tell No Tells” also proved to be another hurdle for the team. Academy Award winner Javier Bardem introduces the character Capt. Armando Salazar, an undead pirate hunter from the Spanish Navy with a distinctive look. Bruckheimer was particularly worried about bringing that character to the screen. “That was always a concern – If we could actually pull it off.” he said. “We had these drawings that the directors did with the production designers, cinematographer and the writer, and it was so interesting-looking. How do we transfer that to the screen? It took us a year to work on these sequences to get them right. It was really arduous to keep going back, when the hair didn’t flow right or didn’t look real. We kept doing it and doing it until we got it perfect.” 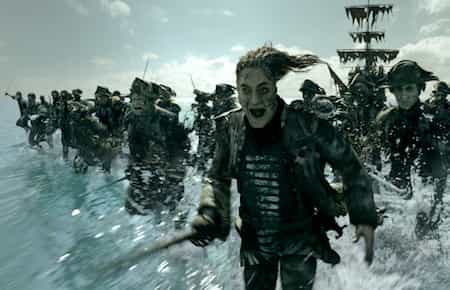 Bardem also had his fair share of time in the makeup chair for this role. He recalled the sometimes frustrating experience in the three-hour sessions, “It drives you nuts. The first thing they do is give you coffee. They’re nice. The second thing they do is put glue all over your face, like actual glue with a brush. Then they put these chicken breasts on you. Then they say ‘Now don’t talk, eat or drink for the next three hours.’ Then you start to get crazy and then when they say action, you have the rage of the character.” He was thankful, though, the CGI for his look was all post-production and he could deliver the performance he wanted. “They adjusted to the performance, which is good. Because I was worried about that and they said ‘do your thing and we will adjust to what you do’. It’s funny because I thought of my character being a wounded animal and sometimes would be very aggressive on the movements and I didn’t think about if I did [a fast head jerk], what would they do with the hair.” 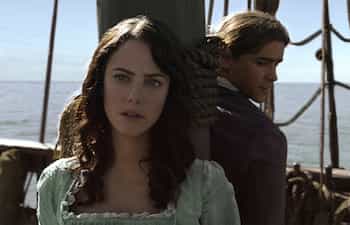 Throughout the Pirates films, we’ve seen incredible talent provide us with strong, female characters who equally match their male counterparts. Kaya Scodelario, from “Maze Runner: The Scorch Trials” and TV’s “Skins”, plays the brilliant astronomer Carina Smyth and was tasked with filling the shoes of Penelope Cruz and Keira Knightley as the primary women among a cast of men. Scodelario made it clear she was up for the challenge of portraying these types roles when asked about the importance of strong female characters on screen. “There’s a reason why that question never gets asked to guys, because their characters are always flushed-out and interesting. Yet there still has to be this conversation about a strong, independent female role. And that’s such a shame, but I think it’s great that we’re speaking really honestly about it now and I’m happy to fly the flag for that. It’s an honor to play a woman that is so layered and so interesting because I don’t know a single female who isn’t. I don’t know any women that’s just simple, who can be defined by one word or one sentence, so why should that be what we see in a movie?” Scodelario takes the idea of a modern woman and effortlessly blends it into Carina throughout her performance, providing the most progressive female role the franchise has ever developed.

Disney had their work cut out for them for the newest installment of Pirates and expectations from fans are perhaps the highest they’ve ever been. However, this installment provides a film truly inspired by “Curse of the Black Pearl” and should delight audiences with swashbuckling adventure, tons of comedy, unexpected thrills and a whole lot of heart that. “Pirates of the Caribbean: Dead Men Tell No Tales” sails into theaters nation-wide March 26.

• Author Tiffany Mink is a California-based global Disney park hopper. She is CEO of the magically-inspired apparel company Whosits & Whatsits and contributing member of the Disney-centric YouTube collab channel Thingamavlogs.

Here’s our video review of the film by Patrick Dougall and Francis Dominic: