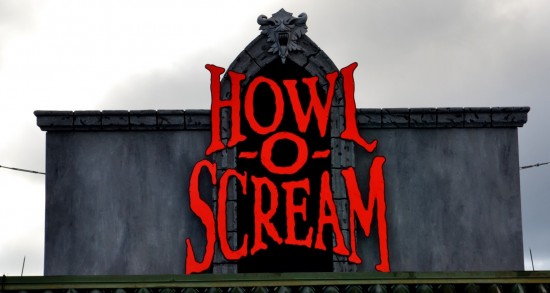 Circus of Superstition takes 3D houses to the next level. Not only was it my favorite house this year, but it is also my favorite 3D house I have ever been in and one of my favorite houses of Howl-O-Scream so far. The 3D effects are fantastic, from vibrant black lights to pitch darkness, the effects are top-notch and some are a first of their kind. The theme of the house is superstitions, some include spilling salt or breaking glass, causing bad luck or even getting warts from frogs. The scares are all presented in unique and different ways from overhead to lunging out at guests, to appearing and disappearing in complete darkness. This house is definitely the top “must see” of the year.

While I may have not seemed too scared in my scream cam, Blood Asylum is definitely the goriest and intense house this year. While some of the scares from previous houses including Reconstruction/Deconstruction and Death Row Vengeance are implemented in the house, there is also a new combination of new scares and definitely new sights. The theme revolves around “The Creature” escaping his high security cell and going on a rampage throughout the Asylum skinning faces, you see “The Creature” throughout the house and in the end, you end up in his cell.

This year Nevermore has returned with more than just a few twists. While I won’t give away all the new details, I can say that a few of the rooms aren’t even recognizable, including the first room which is my favorite addition to the house this year. The pacing of the house has also picked up and the whole ambiance has more of the Edgar Allen Poe vibe that was lacking last year.

This house was by far my favorite house last year but this year it had some tough competition. While the house didn’t go through many changes this year, it was still a solid house with lots of scares. My favorite scene is still the final one in which you end up “six feet under” and encounter a wide array of zombies, including the icon for this year’s event, Trickster.

Hard times have fallen upon the vampires and now their casino is condemned. This house was full of glitz and glamour last year with flashing lights and music of a casino implemented even in the queue, and now the lights are out and the vampires are more vicious. This house went through the most changes from previous houses, with the lights out and only a flashlight to lead your way, scares come from above, below and all around guests. The scares are mostly activated when a flashlight is shined upon them. While I miss the former glitz and glamour of the Revivara Casino, this is a great and effective new twist on the former house.

The toys are back but this time they are mutated. A chemical spill took place nearby and now the toys are more vicious than ever. This house is more or less the same as previous years and has lost its appeal from its first few years of existence. While first-timers will enjoy the house, repeat guests may notice the wear and tear of this formally top-notch house. The best addition to this house is the surplus of scare actors, it seems as if there are more actors than ever in this house and it’s sure to be a “must see” for  first-timers.

Watch as guests scream their way through this year’s houses at Howl-O-Scream:

Last year, Howl-O-Scream reinvented the street experience of haunt events. With over 250 scare actors roaming the streets. This year’s street experiences expand upon those, including two full scare zones and dozens of roaming hordes.

This year, the streets of Busch Gardens Tampa are once again transformed into the feeding grounds for dozens of hordes of menacing creatures. The experiences start before you even enter the park and continue throughout in every dark corner and even in food service areas. New characters debuted at this years event such as gothic vampires, grave diggers with sparking shovels and harvesters looking to harvest anyone that lurks near. You never know what creatures are going to be around the next corner.

Along with the dozens of hordes, Howl-O-Scream brought back a few scare zones. Faded Memories can be most easily described as a collection of Howl-O-Scream’s past. But it is so much more than that for true fans of the event. Faded Memories has 13 separate areas inside the scare zone to celebrate the 13 years of Howl-O-Scream, each area features the sign from that house and one character from each house. If you go through on different shifts then you may even get to see two different characters from those houses. From MyX: Revenge Rocks, to Escape from Insanity, to Club Muse, there is something for all fans of the event.

The Family Plot is the front gate scare zone. Similar to last year, it features sets from the commercial and recreates the commercial in park as well. Trickster is indeed a tricky guy so he may be hard to spot at first, but he is there and ready to taunt guests as they enter the park.

Walk-through Faded Memories, The Family Plot and the hordes of Howl-O-Scream in this overview video below:

Fiends is back once again this year, but this time it has moved inside the Desert Grill. While some may have complained about the initial announcement of the change, they will be leaving with a different feeling as the naughty nurse filled show is back and better than ever. This year’s show is as great as always and even includes some new additions, costumes and songs and the venue is air-conditioned so it is a nice break from the Florida heat.

3. Slip of the Tongue: A Demonstration of Dark Magic

The other street show is Slip of the Tongue: A Demonstration of Dark Magic, which is not only highly entertaining and funny, but also gives off that great creepy Halloween vibe which a lot of magic shows lack. The magic acts will keep guests on their toes throughout and includes all the gore, suspense and fun that you would expect from a Halloween event magic show, but taking it to the next level.

From the cutting edge effects used in Circus of Superstition to the homages to the past in Faded Memories, this year’s event is a great nudge to Howl-O-Scream’s past while ushering in the future. The hordes are better than ever and lurk in ever dark corner of the event. Howl-O-Scream continues to haunt Busch Gardens Tampa through September and October on Thursdays, Fridays and Saturdays. To purchase tickets or for more information click here.