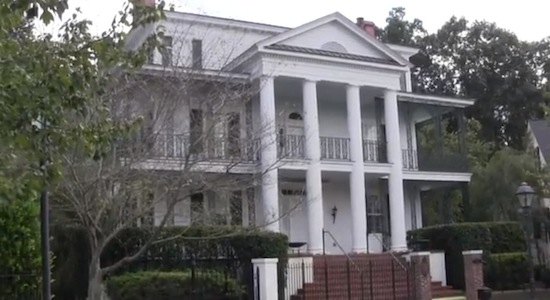 Theme Park Connection specializes in buying and selling Disney and theme park items online and through their huge warehouse in Winter Garden, Fla. While they’ve sold a lot of huge collectibles, this is their largest yet – It’s a four-story, seven bedroom, six bath, more than 10,000-square-foot home modeled after Disneyland’s Haunted Mansion. 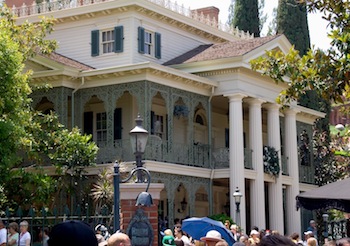 The livable mansion is located in Duluth, Ga. and you can purchase it today through eBay for $873,000. “This definitely is the most unique Disney item we have ever offered for sale,” said Theme Park Connection Owner Marc Pianko. “We are used to selling rare Disney items such as ride vehicles, attraction props and signs, along with a warehouse full of unique Disney items,” but, he claims “This one is beyond anyone’s wildest dream. Can you imagine the Halloween parties you could have here?”

Owner and designer of the home, Mark Hurt, a Disney contractor, partnered with Theme Park Connection to sell the property after becoming a customer of the company. Hurt built the home in 1996 and added elements to replicate the attraction at Disneyland. Unlike the real Haunted Mansions at Disney parks, there aren’t 999 happy haunted living in this home. Hurt assures worried potential buyers that the house is not actually haunted as he has lived there with his wife and son for many years.

Hurt is no stranger to Disney projects and he made sure the design matched the dimensions and architectural structure of the real Disneyland Haunted Mansion as closely as possible. He even found the actual foundry that Walt Disney used to make the iron details of the original Haunted Mansion and had them make the iron details for this house. You’ll find an authentic attraction welcome gate plaque at the entrance, the iconic front four white pillars on top of the roof and the four faux smoke stacks that match the Disneyland Haunted Mansion to a tee. Flickering lights and outside elements add to the uniqueness of the replica of the attraction home’s exterior.

Of course he had to add other elements to make the home livable like real bedrooms, bathrooms and a mailbox, but he has included unique interior design elements. One in particular is an animated bathroom Hitchhiking Ghost scene. The inside unfortunately doesn’t have the Disneyland Haunted Mansion Doom Buggy ride, but rather is more reminiscent of a real mansion.

Hurt is selling the home because he has moved on to an even more ambitious project but hasn’t stopped designing and building unique Disney inspired buildings. Mark is working on his current project of a resort themed house modeled after Disney’s Grand Californian along with a replica of Walt Disney’s backyard barn and a pool that will be themed to the Jungle Cruise in Kaua‘i Hawaii. Hurt says that Walt Disney was the mentor that I had but never met.

More information can be found on Theme Park Connection’s web site. Only real estate agents, media and those pre-qualified will be able to view the home, so unfortunately there will be no public tours offered.

ThemeParkConnection is the world’s largest buyer of Disney items from individuals and the largest reseller of Disney collectibles in the world. The items they acquire are then sold online through eBay or at their 8,000-square-foot Orlando warehouse that is open to the public. They have the world’s largest rotating collection of Disney items in the World with over one million items in stock. They are located at 1307 Green Forest Court, Unit 110, Winter Garden FL, just 25 minutes from Walt Disney World. Owner Marc Pianko said they are currently working on acquiring one of the real Disney Monorails.

Must…. win…. lottery. Actually, I will hold out for the Grand Californian themed house. WOW!

Wonder how many looky-loos come by each day to get a glimpse or knock on the door to ask to see inside. At least its in a gated community. It would have to be a retirement home for me because i would not want to leave.