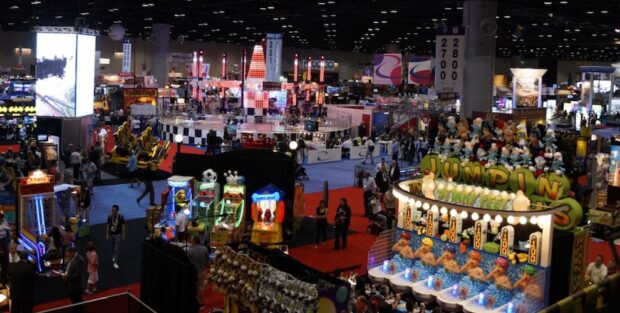 Approximately 29,000 amusement park and attractions industry professionals from 110 nations packed the Orange County Convention Center for the IAAPA Attractions Expo 2013 this past November. It ended a record-breaking year as more than 43,000 people participated in IAAPA’s Expos around the world.

IAAPA Attractions Expo is the largest conference and trade show for the $24 billion global attractions industry and serves as the one-stop-shop for the industry. The who’s who gathered at the expo to debut new products, test the latest technology, discuss the current trends and hot topics, learn from peers and experts, and taste new food and beverage treats.

The event is owned and produced by the International Association of Amusement Parks and Attractions (IAAPA). The five-day Expo had an estimated $48 million economic impact on the Orlando area.

IAAPA Attractions Expo 2013 by the Numbers:

• 1,500 participants met, socialized, and shared ideas at the Opening Reception.

• Expo participants raised a record-breaking $115,000 for Give Kids The World, a resort for children with life-threatening illnesses, with a golf tournament, motorcycle ride, fun run and walk and a chance-to-win.

Here’s our coverage of this year’s expo, from the Dec. 5, 2013 episode of “Orlando Attractions Magazine – The Show”:

Ripley’s Believe It or Not is bringing...

Holidays at Legoland Florida returns for the...