Inside look at the making of Disney’s ‘Moana’ 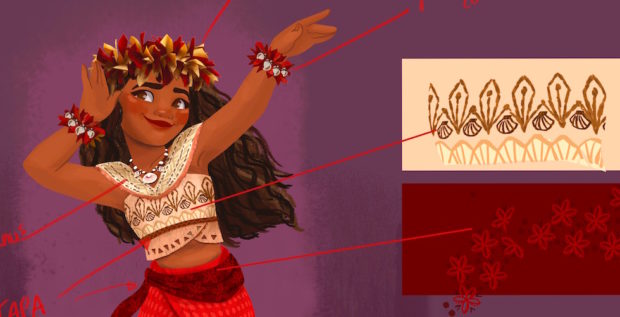 We were treated to an early, inside look at Disney’s 56th animated feature, “Moana” on The Walt Disney Studios lot. Here’s a look at the making of the film.

At the beginning of the day, we were greeted by directors Ron Clements and Jon Musker, who gave us a brief summary of their journey creating “Moana” and the people, places and themes that inspired the film. They explained the movie deals primarily with identity. The identity of the people of the Pacific Islands, the demigod Maui, and Moana. It is a coming of age story featuring a strong heroine who discovers both who she is and where she fits into the history of her people, while not letting others define or dictate to her. Right off the bat, we were shown multiple extended clips from the movie, including the first three minutes, a musical sequence, and a scene that explains the set up of the story. 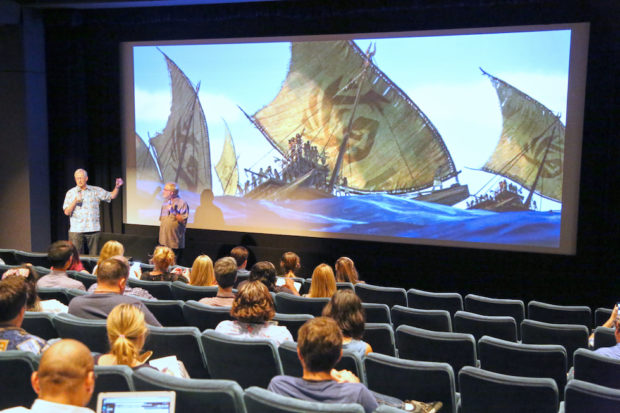 Here’s what we learned from the exclusive clips:

Moana is the 16-year-old daughter of Chief Tui. She lives on the fictional island on Motunui and is constantly at odds with her father, who hopes she will grow up to lead their island, but she is inexplicably drawn to the sea. “It doesn’t seem possible for her to fulfill her heart’s desire and still be true to her people and her culture,” said director Ron Clements. Her father insists that no one go beyond the reef that encircles their island because it is too dangerous. Moana’s grandmother, Tala, is very connected to the legacy of voyaging that existed in their family years before. We see a clip of Tala telling Moana and other very young children stories about the demigod Maui. All of the children are terrified, except Moana. 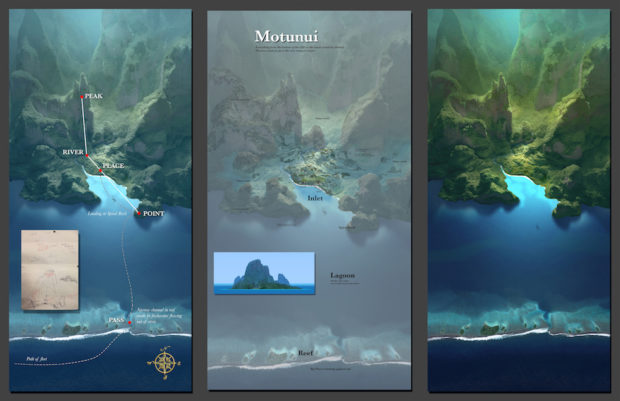 Visual development for the island of Motunui, and the layout of the village. Artist: Andy Harkness, Moana Art Director, Environments and Color.

The first three minutes of the film are of Tala telling the story of Maui stealing the Heart of Te Fiti, an ancient artifact responsible for creating new islands and oceans. Other forces seek the Heart as well, and Maui ends up losing it, as well as his magical fish hook, in the midst a fight with the lava demon. It is said that all of the islands will slowly deteriorate and disappear until the Heart is found and returned to its mother island.

In a later scene, Tala tells Moana to visit a cave where she finds the boats of her ancestors. She beats a drum on a large boat and has a vision of her people voyaging across the ocean. This scene features a musical number with vocals by Lin Manuel Miranda. Until this moment, Moana didn’t know that her ancestors were voyagers. Shortly after, her grandmother passes away, setting Moana off on her mission to find the Heart of Te Fiti and save her island from being destroyed.

Directors Ron and Jon stressed how important it was for them to create a unique look for Moana – both the movie and the character. They stated for each film they have worked on, they have attempted to have a very distinct style, and this was no exception. A particular challenge included figuring out costume design for the characters. The visual development team for Moana specifically mentioned that the crew’s second research trip provided them with photos of women from the South Pacific that were found to be inspirational. These helped with developing Moana’s physical features. Her clothing, however, was more difficult to nail down, mostly because the story takes place 2,000 years ago and there is little reference to what women would have worn at the time. The research team worked hard to speak to Islanders about what materials would have possibly been used at the time. Mulberry tree bark, pandanus and shells were some of the items that made it into Moana’s final costume design. There was also an intentional choice to clothe Moana in red tones, as red is the color of royalty for people of the Pacific Islands. Her abalone necklace, in particular, was a piece of her outfit that went through many design phases. They wanted it to stand out as a symbolic piece of jewelry that represented not only Moana’s personality, but her struggle. The pendant has an intentional “land and sea” feeling, with a piece of white shell intruding into the blue stone like and island jutting into the ocean. 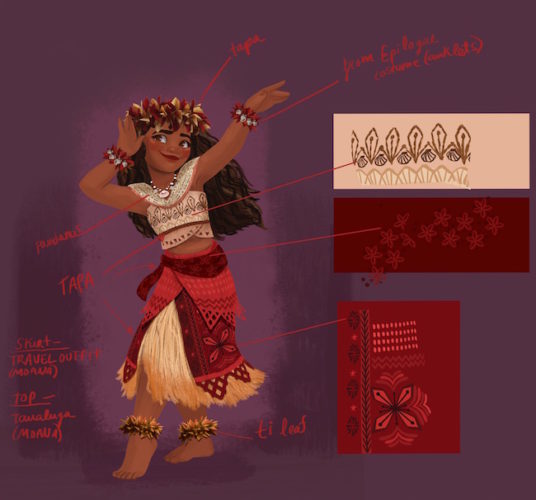 Maui is co-lead of the film, alongside our heroine, Moana. The Animation Supervisor for Maui, Mack Kablan, described the challenges of writing and designing this character, considering he is such a prominent legend for Pacific Islanders. The perception of Maui varies across all of the islands, so it was up to his animation team and the Oceanic Story Trust (a team of experts—anthropologists, academics, educators, linguists, master navigators and cultural advisors), to combine all of the legends they heard about Maui into one, likable, character. 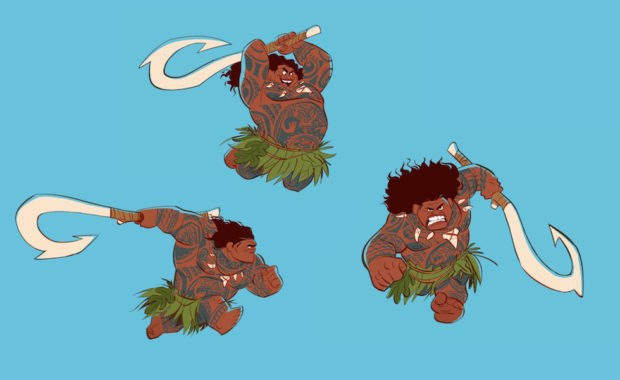 While some Islanders imagined Maui as bald, the team eventually went with wild, long hair for the demigod to represent his reckless and untamable personality. Islanders almost unanimously saw him as a trickster, which gave both the animators and writers a lot to work with. The animators also used reference footage of Dwayne “The Rock” Johnson recording audio for Maui in order to mimic some of his head and gesture movements. You may have already noticed that Maui inherited The Rock’s very famous eyebrow arch.

An even bigger task than developing a larger than life character like Maui was creating his much smaller alter ego, which the team calls “Mini Maui”. Mini Maui is the 2D animated Maui tattoo that Maui has on his chest. Mini Maui is many things to Big Maui – his cheerleader, his confidante and most importantly his conscience. But for the animation team behind Maui, Mini Maui posed a new challenge. They wanted to put a 2D animated character onto a CGI animated body – something that had never been done before in this way by Disney. To tackle this task, the team enlisted veteran Disney animator, Eric Goldberg, who most famously served as the lead animator for the Genie during Aladdin. Maui’s CGI animation team worked closely with Goldberg as he animated Mini Maui. They even admitted to requesting additional Mini Maui sequences just so they would be able to work more closely with Goldberg, who is an idol to many members of the Moana animation team. 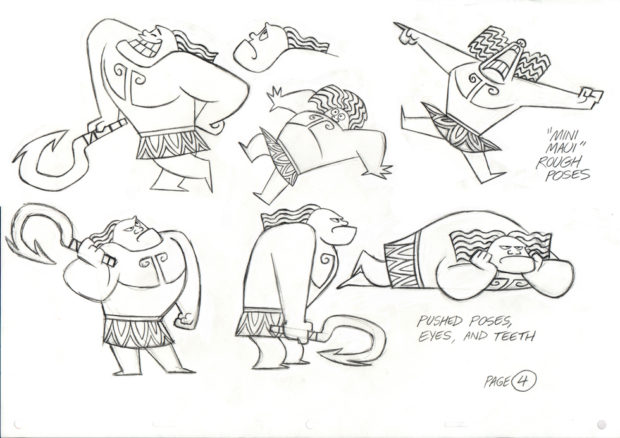 In addition to Moana and Maui, there is a generous supporting cast of characters joining in on the adventure. This includes Hei Hei the rooster and Moana’s pet pig, Pua. While Pua has the basic purpose of being Moana’s friend and serves as a symbol of her home and family, Hei Hei has the honor of joining Moana on her quest – but he almost didn’t make it into the movie at all.

That’s right – Hei Hei was almost scrapped from the project completely. Members of the Moana story team – Jared Bush (Screenwriter), Dave Pimentel (Head of Story), David Derrick (Story Artist) and Sunmee Joh (Story Artists) – explained the many transformations Hei Hei went through before finally being OK-ed by John Lasseter as a final character for the film. In early iterations, Hei Hei was a watch dog for the chief. Later, a judgmental hot shot with a chip on his shoulder. And finally, in order to work him into their tale, Hei Hei became … well, stupid. The team explained that they had to bring Hei Hei’s IQ down … way down, in order to allow him to flow with the action of the film. In a scene featuring the Kakamora (wild, coconut-armored pirates who live on a trash-covered vessel), Hei Hei accidentally swallows the Heart of Te Fiti and is captured by the Kakamora. This is one of many examples of a time where Hei Hei becomes a catalyst for the film’s plot. His stupidity often drives him into precarious situations where he needs to be rescued by Moana, thus allowing her to show off her many skills.

The Moana story team was charged with saving the character “Heihei” from being cut from the film. These story boards illustrate an action sequence from the film in which the Kakamora are trying to steal the Heart of Te Fiti from Moana and Maui. In the initial version, top row, the Kakamora steal the heart and are pursued by Moana who captures it back. In the new version, bottom row, rooster Heihei first swallows the Heart of Te Fiti, and the chase ensues between the Kakamora and Moana, only this time they’re fighting to maintain possession of Heihei. (Click on the art to enlarge.) Artist: Sunmee Joh, Story Artist.

“It’s a story that takes place many, many years ago, but with a contemporary feel,” said producer Osnat Shurer. “Our hope as filmmakers has been to create a universal story that is also an homage to the beautiful people of the Pacific Islands who inspired us along this journey.” Learning about the beautiful cast of characters was only one of my favorite parts of my day at the Disney Studios. The team worked tirelessly to authentically tell a story from the South Pacific and the geography and mythology were as meticulously crafted as the characters. Look out for another article describing these aspects of “Moana” very soon here on the Attractions Magazine Blog.