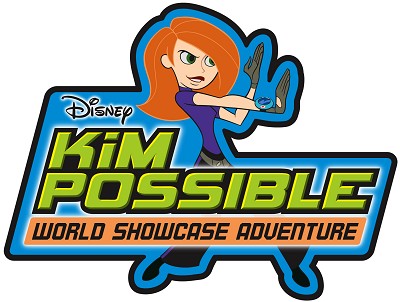 Later this fall, Epcot guests will get to experience a brand new interactive attraction inspired by Disney Channel’s animated series Kim Possible. The new experience is slated to premiere in late 2008.

Using the latest technology, Disney’s Kim Possible World Showcase Adventure will invite guests of all ages to become secret agents, teaming up with members of Team Possible to save the world from various comical villains and their mad inventions.

As guests embark on this international adventure, they will receive an official “Kimmunicator,” at kiosks throughout Epcot. The interactive, handheld device is designed to help them maneuver through the mission. The interactive device connects guests with a variety of Kim Possible characters who provide clues to stop villains from taking over the world. The highly interactive devices also allow guests to control top-secret equipment hidden inside the World Showcase pavilions, creating an ultra-interactive adventure jam-packed with mystery and excitement.

“Disney’s Kim Possible World Showcase Adventure is an example of a next generation attraction that offers fun and excitement for the entire family,” said Jim MacPhee, Epcot vice president. “We are constantly exploring new ways to provide immersive experiences to Epcot guests, and this new offering will add to our dynamic portfolio.”

Disney’s “Kim Possible” is an Emmy Award-winning animated series from creators/executive producers Bob Schooley and Mark McCorkle and Walt Disney Television Animation. It tells the story of an average high school cheerleader, Kim Possible, who, in her spare time, happens to save the world from super villains. With the aid of her enthusiastic pals, this contemporary heroine is capable in ways few high school students ever imagine. On the flipside, she realizes that defeating the bad guys comes easier than coping with the typical teen pressures of schooling and socializing. Viewer’s connection to “Kim Possible” led to a successful off-TV franchise for The Walt Disney Company including Kim Possible and Ron Stoppable characters at Disney Parks, DVDs, books, video games and Disney Consumer Product’s line of “Kim Possible” branded products available at mass retailers nationwide.

Magazine lists free things to do in Orlando