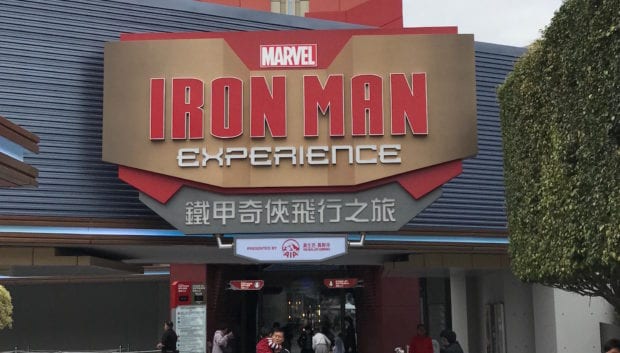 The Iron Man Experience Sneak Peek is held from Dec. 23, 2016 to Jan. 8, 2017. Starting today, guests staying at the resort’s two hotels will receive a Priority Admission Pass of Iron Man Experience to shorten the wait for their turn on the Marvel-themed ride.

The eminent innovator and pioneer, Tony Stark has selected Tomorrowland in Hong Kong Disneyland to host Stark Expo, where he will show off his latest high-tech creations in various exhibition halls – the Hall of Legacy, the Hall of Protection, the Hall of Energy and the Hall of Mobility. Guests will be among the first to explore Tony Stark’s latest innovations up close and fly in a gravity-defying Iron Wing flight vehicle in Iron Man Experience.

For the first time, the park has integrated strong Hong Kong elements into a park attraction by using Hong Kong and its skyline for the fly-through ride. After putting on a pair of StarkVision glasses and taking off on Stark Industries’ special Expo-edition Iron Wing, guests will make their way to the Hong Kong Stark Tower powered by the arc reactor and whizz alongside Iron Man through streets that resemble those in West Kowloon and downtown, and fly over iconic Hong Kong landmarks like Tsing Ma Bridge, Victoria Harbour and the city’s pristine mountain ranges.

Of course, it wouldn’t be a Marvel-themed attraction without a cameo by Marvel legend Stan Lee. You can spot him in the boarding video, and we’ve heard he pops up somewhere in the ride itself.

After the ride, guests can then meet Iron Man himself. At the Iron Man Tech Showcase presented by Stark Industries, guests will find various Iron Man armor suits. Iron Man will also make his first appearance at Hong Kong Disneyland to meet and interact with guests.