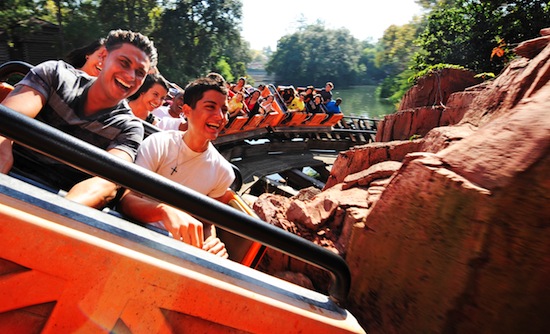 Paul Delvecchio, aka “DJ Pauly D” from the hit MTV series “Jersey Shore,” left, takes a ride on the Big Thunder Mountain Railroad at the Magic Kingdom with Celebration, Fla. High School senior Bryan Lopez and a host of Central Florida high school seniors behind him. Delvecchio was at the theme park to announce his involvement as one of the featured performers for “Disney Grad Nite 2011.”

(UPDATE: Because of an unforeseen scheduling conflict, DJ Pauly D will be unable to attend this year’s event. MTV will be taping “Jersey Shore: Season 4” throughout April and May in Italy.)

Grad Nite is a private, after-hours party at the Magic Kingdom in April and May 2011 for high school seniors from across the country. Delvecchio will serve as the party’s featured DJ, and headline the graduation party alongside UK-born R&B singer Taio Cruz and pop duo “3OH!3.”

Here’s what DJ Pauly D had to say about Grad Nite and Disney World:

While in town, I wonder if Pauly had a chance to see Snooki and The Situation parodied during Bill and Ted’s Excellent Halloween Adventure at Universal’s Halloween Horror Nights?

the video is set to private…

I’m not sure what’s wrong with it. YouTube is haven’t troubles. Hopefully it’ll be fixed soon.