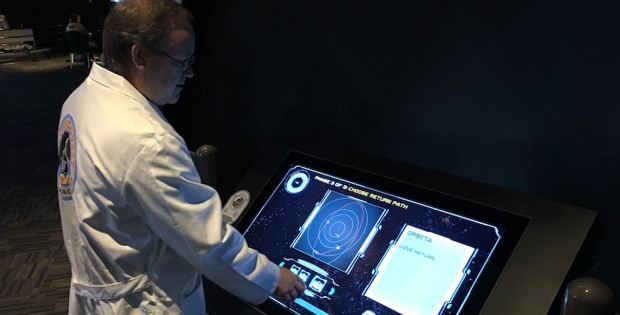 Imagine making your way to Mars in a simulated capsule or assembling your own launch team from a pool of NASA’s best. These and other adventures are now a reality at Kennedy Space Center Visitor Complex.

Cosmic Quest interactive live-action game experience engages and hopes to inspire young guests, known as “trainees”, like never before by immersing them in a number of STEM-based (science, technology, engineering and math) space adventures while teaching them about NASA’s current and future space science and exploration endeavors.

“Never before have we been able to offer our younger guests the opportunity to engage directly with NASA designed missions in this way,” said Therrin Protze, chief operating officer, Kennedy Space Center Visitor Complex. “By introducing Cosmic Quest, guests discover firsthand how to launch a rocket, redirect an asteroid, and build a habitat on Mars – all based on real NASA missions. This gameplay experience is designed to inspire and educate young people about STEM: science, technology, engineering and mathematics.”

Cosmic Quest kiosks are incorporated throughout the visitor complex, and offer a host of NASA-inspired adventures:

• In NASA’s Next Rocket Launch Adventure, located at the Apollo/Saturn V Center, “trainees” assemble their launch team from a pool of NASA’s best, including environmental engineers, biologists, computer scientists and other experts, each of whom are instrumental in overcoming challenges leading up to the launch. As the rocket lifts off the pad, the trainee – safe in mission control – is immersed in the sensations of the launch, including powerful vibrations and steam.

• At Mars Habitat Adventure, located in Journey To Mars: Explorers Wanted, trainees can pick from two missions: building a research exploration base or building a permanent habitat, both of which must be able to protect inhabitants from poisonous dust and radiation on the Red Planet and keep them physically and mentally fit. During the adventures, trainees will learn about the complications of living on the surface of Mars and the components needed to sustain human life. Trainees see their habitat or base displayed as a 3-D holograph while using a high-definition touch screen to assemble all of their necessary parts.

• Asteroid Capture Adventure, located within the Imax Theater, calls for trainees to command a robotic spacecraft and overcome challenges in deep space to capture and redirect an asteroid. This deep-space adventure takes place in front of a massive half-dome screen, which completely immerses trainees in “outer space” as they redirect the asteroid into the orbit of Earth’s moon.

• Finally, the International Space Station Research Adventure, located within Space Shuttle Atlantis, challenges Trainees to gather items and information to complete various experiments on the International Space Station (ISS): Humans in Space, Plant Systems in Space, Materials in Space and Closed Loop Systems. Trainees perform life-science experiments and discover what astronauts are doing on the ISS right now. Using large, interactive touch screens, trainees will solve challenges such as countering the negative effects of microgravity on the human body and creating an efficient greenhouse to grow vegetables using aeroponics. While performing the experiments, trainees find out how space research will not only prepare humans for life on Mars, but also how it improves medicine, farming and technology here on Earth.

Robonaut, a replica of NASA’s real R2 robot currently working aboard the ISS, serves as a virtual narrator and guide as Cosmic Quest trainees use their “astronaut badges” as activation devices to interact with digital progression points and touch screens located throughout each of the exhibit areas.

Cosmic Quest costs $24.95 in addition to the price of daily admission. All adventures are included in the price; the completion of one adventure is not dependent on other adventures. Cosmic Quest badges can be used for an entire year.

Here’s look at our coverage of the game on “Attractions Magazine – The Show”: