Off Kilter, Mo’Rockin and other entertainment being replaced soon at Epcot 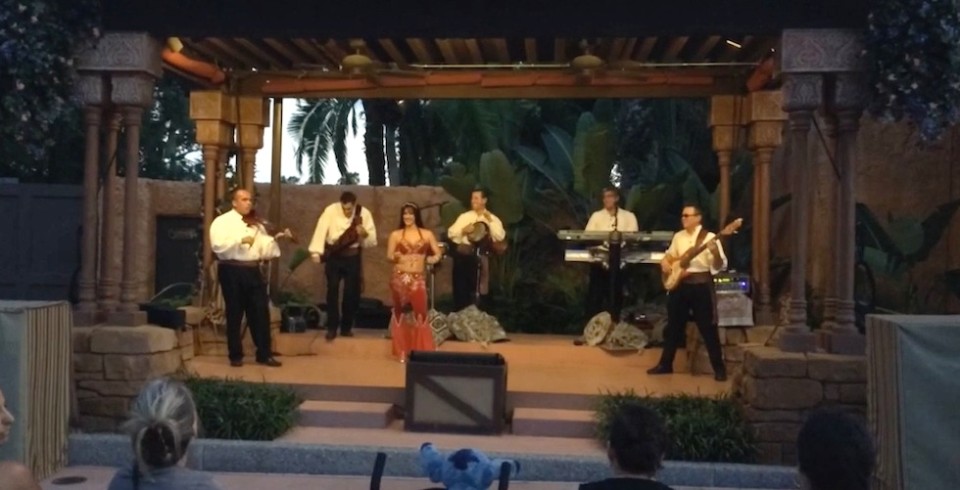 Some long-time entertainment at Epcot at Walt Disney World will be ending in September, and will be replaced with some different kinds of shows. Disney officials have told cast members they’re planning on refreshing some of existing acts and retiring others over the next few months.

The popular band Off Kilter will have their last performance in the Canada pavilion on Sept. 27, 2014. Mo’Rockin in the Morocco pavilion (pictured above) and the Spirit of America fife and drum corps will also be ending that day. The World Showcase Players will be ending on Sept. 25.

Some of the replacement acts include flag-waving performers in the Italy pavilion, a lumberjack show in the Canada pavilion, Celtic folk music in the United Kingdom pavilion and Berber music and dancers in the Morocco pavilion. No start date for these new acts was given.

Here’s a video of Off Kilter performing

You can hear Mo’Rockin performing throughout this video for one of the Moroccan restaurants and see their belly dancer at the end:

Epcot’s ‘Candlelight Processional’ narrators have been announced for...

Will miss Off Kilter so much.

REALLY REALLY bad news about Epcot not having Off Kilter – one of the big reasons we love to go!

Sounds like an ill-advised cost-cutting measure by EPCOT management. Without these acts, EPCOT does not have enough top-rated attractions to maintain attendance levels.

I guess Disney doesn’t want me to return. What are they going to replace these class acts with??? Maybe they should cut the cost of admission, also…

It is sad that Off Kilter will go away as it is when most anything goes away. But if nothing ever went away then we would never have the opportunity to see the things we all come to know and love. Like Figment, it will NEVER be the same as it was in the early 90’s. Long live the DreamFinder !

Whenever I go to Epcot, and it’s frequent, I always see a large crowd gathered for Off Kilter with lots of happy tourists bobbing their heads and enjoying the show. Trading them out for a lumberjack show isn’t the answer. But when have WDW execs ever listened to the public?

I would have to agree with you!! This year I have suffered a massive head trauma and stroke. My mom and I are planning to come back next April; to think Off Kilter will not be there doesn’t give us any reason to go to Epcot.As we stay 10 nights and go to EVERY show!!

WHAT!!!!! I love Off Kilter- I was really looking forward to seeing them in December Cost cutting by Disney as theyve blown the budget on magibands!!!! Please dont ruin Epcot.

I agree with FigmentLives. Off Kilter is always the stop i make even if I have to sit and wait for the show time. I really have no idea where Disney’s head is right now. Sure changes are good but I don’t think this is one of the good kind. So far all the changes I’ve read about haven’t been the good kind. I guess I’ll have to be content with the you tube videos and my CDs because I won’t be going back to EPCOT until 2015. Lumber Jacks, really? Bad call there guys.

Whenever I see epcot cutting acts, it always stinks. I do breathe a sigh of relief that Sergio the Italian Clown isn’t amongst the cuts. I love that guy!

I hope folks that truly care about the band contact Disney and Epoct and complain! It’s going to take all of US who truly love the band to stand up and fight for them!! They are a great group of guys and very personable which makes it even more fun!!!