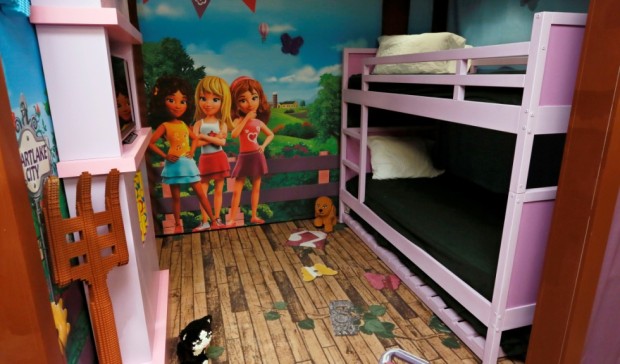 Legoland Florida Resort has revealed “Lego Friends” as the final theme for rooms and suites inside their new Legoland Hotel opening in May.

The announcement came at a New York City event where a curtain dropped and the last of four highly-themed room designs was revealed. Guests at the event experienced the theme first-hand by stepping into a life-size replica of the children’s sleeping area of the room. The detailed room model included a bunk bed with a trundle bed, TV, Lego Models and a treasure chest. SGA Production Services in Orlando created the replica, closely following the plans for the actual hotel rooms.

The Lego Friends toy line is also the inspiration for Heartlake City, a new land coming to both Legoland Florida Resort and Legoland California Resort this summer. The new land in Florida includes a ride themed to Mia’s love of horses: Mia’s Riding Adventure, plus a new interactive show called “Friends to the Rescue” as well as Stephanie’s News Room and shops inside Heartlake Mall.

Legoland Hotel is opening on May 15, 2015. To book a room, visit LegolandHotel.com.