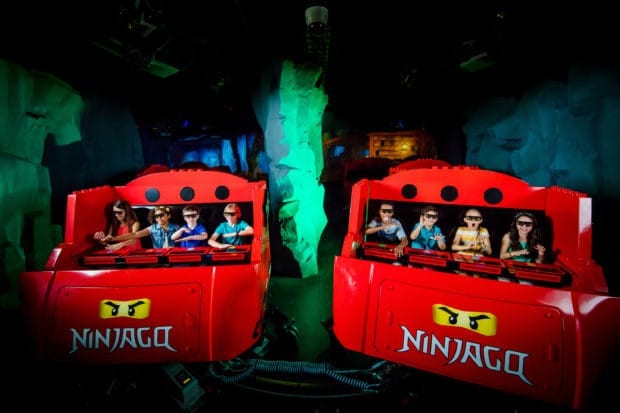 Kids can “become the ninja” when they enter the martial arts kingdom of Lego Ninjago World, now open at Legoland Florida Resort.

Inspired by the popular Lego building sets and the “Lego Ninjago: Masters of Spinjitzu” TV show, Lego Ninjago World puts guests at the center of the action in several ways:
• Lego Ninjago The Ride – A state-of-the-art “dark ride” where guests score points using ninja hand moves to blast animated fireballs, lightning and more at waves of 3D villains. Children under 48 inches tall must ride with a responsible person 48 inches or taller who can ensure their safety.
• Zane’s Temple Build – A Lego building experience where kids can contribute to a giant model of the mountaintop Ninjago monastery with bins of loose Lego bricks.
• Kai’s Spinners – Master the ancient art of Spinjitzu at these twirling, whirling, single-
child platforms; recommended for ages 5-12.
• Cole’s Rock Climb – A horizontal, right-to-left climbing wall to test kids’ strength and
endurance; recommended for ages 2-12.
• Jay’s Lightning Drill – Practice precision and reflexes by pressing as many light-up
targets as possible in 30-second sessions; recommended for ages 2-12.

Those looking to score high on Lego Ninjago The Ride can practice these five signature ninja hand moves to use while riding:
• The Cobra: Hold your fingers like a snake’s head, then strike your arm forward.
• Chops of Fury: Hold both hands in front of you, palms facing, and do quick karate
chops.
• The Fireball Flinger: Clench your hand into a fist, then thrust your arm forward while
opening your fingers.
• The Lightning Strike: Hold your arm at a slant and chop.
• The Shuriken [SHUR-IH-KEN] Shuffle: Hold both hands in front of you, palms down,
with your arms bent so they touch your chest. Chop outwards repeatedly.