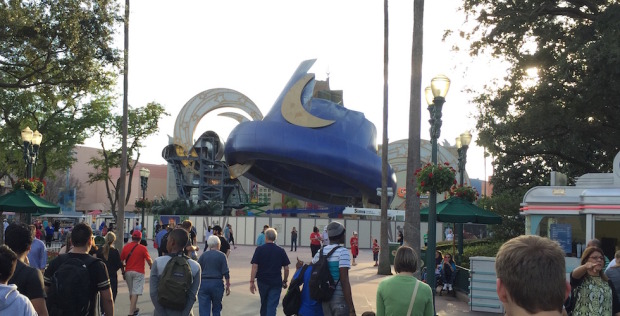 Love it of hate it, the giant Sorcerer’s Hat at Disney’s Hollywood Studios is on its way out. Here’s a look at its removal about half-way through. These photos were taken on Jan. 22, 2015.

Disney hasn’t said why the hat is being taken away, only that it is. They also haven’t announced anything to replace it. It’s assumed the view down the street when you enter the park will return to the way it was before the hat was added in 2001. 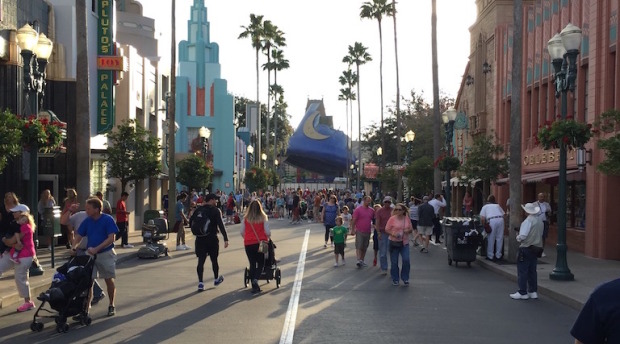 Here’s how it looks now as you walk down the street. You can see a bit of the Chinese Theater poking above the cut down hat. 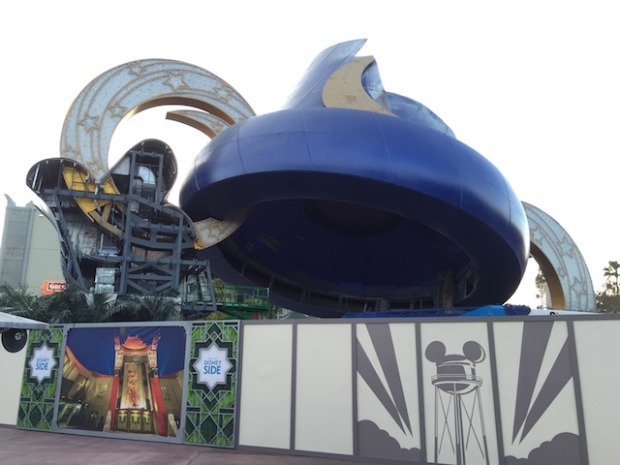 Here’s a closer look. Notice the theater is pictured on the construction wall. You can also see the cover on Mickey’s hand has been taken off. 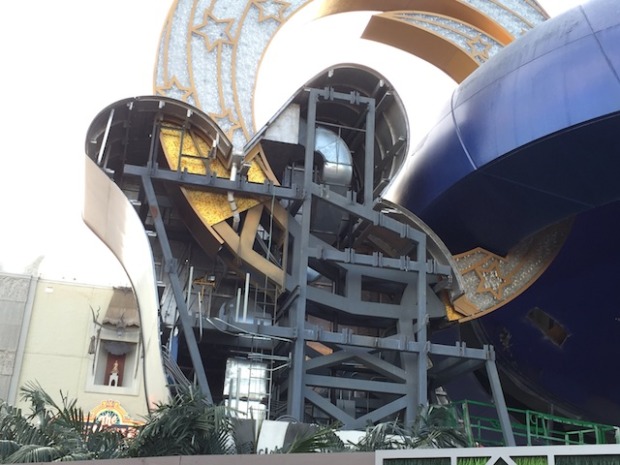 A closer look at the inside of the hand. It’s interesting to see the ducts and pipes inside. You can also see some gold sparkles that never faded from the sun. 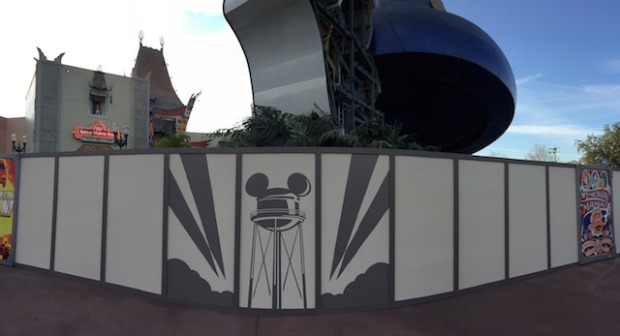 Now that the hat is being taken down, the icon of the park will be what’s pictured here on the construction wall, the Earful Tower. 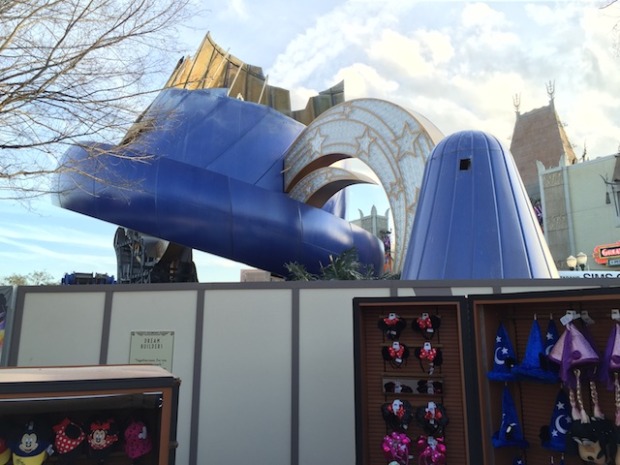 The top of the hat was cut off first and has been sitting on the ground since. Besides that square hole, it seems in pretty good shape. Maybe they’ll reuse it somewhere else. 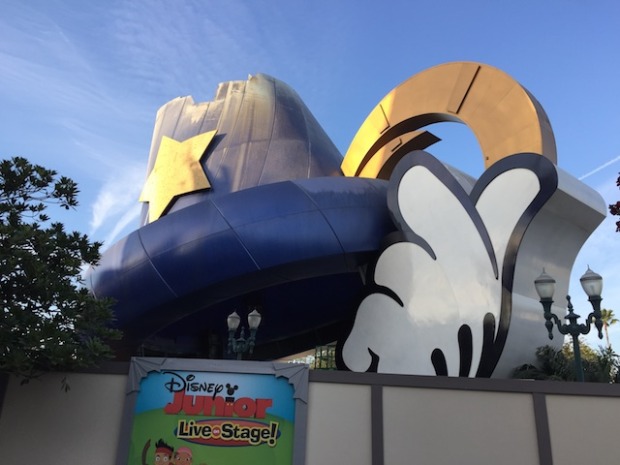 The backside of the hat is really dirty. You can tell from these stains and the jagged cuts, Disney won’t be able to piece it back together in a new location as many people thought they would.

There’s no word on how long the demolition will take to complete. We’re sure they’ll want to have it finished before Star Wars Weekends in May. Since they’ve gotten this far since starting earlier this month, we’re guessing it’ll be finished by the end of February.

Click here for more about the removal of the hat.

Are you happy, sad or a mix of both to see these photos? Post your thoughts below.

Good riddens! I worked at Imagineering within Epcot when the 100 Years of Magic was in the working. My reaction was like most… Why are you blocking the theater with this? Then, after 100 Years was finished, it remained and turned into a souvenir / gift shop. I always hated this. California Adventure has a miniature one. If anything, recreate that small version for Studios.

The difference in feelings really depends on the generation of the Disney park fan. I feel that most adult park-goers already have experience with this old street view without the hat so they can’t be too upset but also not that excited. The hat is all that has been known to the newer generation so this may cause some of the younger fans to be upset. It’s rather funny how opposite a reaction it causes compared to the Days of Disneys Past hoax, the idea of the resurrection of old rides was exciting to old fans and lackluster to young fans. The hat however cause many different reactions. I, a 15 year old park fan, am elated with this change. It’s one, new and two, more realistic to the idea that the whole park represents. No where on Hollywood Boulevard in real life is there a giant hat. The new view of the theatre is much more realistic and puts you more in the world of Hollywood. I think this was the right option for Disney. I am excited to see what else they have in store for Hollywood Studios. With the backlot tour closing and the new Star Wars movie coming out soon who knows what lies ahead? A lot of changes have been going on and there’s surely more to come.

I completely agree with what you just said. I’m a 16 year old fan. I’ve never seen the park without the hat. My last trip was my first to the studios in many years and I realized how out of place it was. I for one, can’t wait to see the theater down Hollywood Blvd. All of the shops on it are designed with the theater in mind. Even some backstories of stores coincide with the theater, at least from what I’ve been told.

I disagree with the other comments. Fair enough there is no giant hat like this on Hollywood Boulevard but this is Mickey’s hat, its special and unique to Disney. I feel it gives Hollywood Studios that iconic Disney touch. Every other Disney park has a main icon that is immediately seen once you enter the park and everyone is able to get a picture with it, guests will not be able to or be too excited about taking a picture with the earful tower in that background.

I am 19 years old so I cant really remember the park without the hat; so im disappointed to see it go and I think Disney are loosing an iconic image with the removal of the sorcerers hat.

On the other hand I am excited to see something different and will keep an open mind, I hope I am pleasantly surprised when the removal is complete.

We were just there on January 23 and were so overjoyed to see this ugly thing come down. Although we are much older than the two first posters (our trio is between the ages of 43 and 65 and two of us were there at the park’s opening), we think it destroyed the whole idea behind the park: to walk in and see that gorgeous, realistic view of the Chinese Theatre (and one of us lived in LA a block from the Chinese Theatre in the late 1970s, so I can tell you on good authority Disney did a great job with that). If they want to keep the hat, they should put it in front of Fantasmic, where it belongs. Applause for somebody having the common sense to get rid of the eyesore. Also, apparently TMC is taking over sponsorship of the Great Movie Ride…we heard some buzz while we were in the park, and I have nothing to back that up, but it was overheard gossip. Has that been announced? If that’s true, it makes total sense why after all these years that hat’s coming down. TMC, being as dedicated to film classics as they are, would never tolerate that hideous, cheap-looking thing blocking the architecturally pleasing, iconic, and classy Chinese Theatre. So my money’s on if the rumor’s true, TMC said “take it down or no deal.” Yay!

I loved the hat! And I will miss it. Whimsy is delightful and sorely needed in the goofy world we live in. I sure hope they bring it back…and soon!