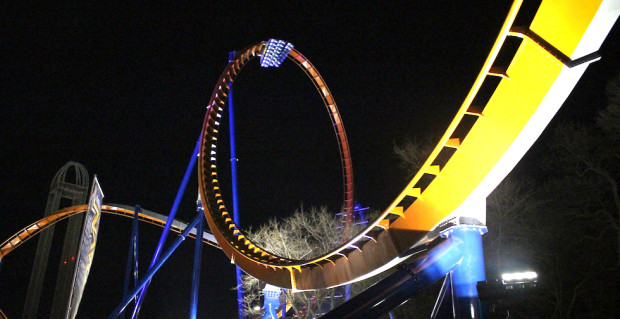 Sandusky, Ohio – Cedar Point has been a long-time destination for coaster enthusiasts worldwide. Nestled on the coast of Lake Erie, between Toledo and Cleveland, Ohio, the park bustles to life each summer having entertained and thrilled generations of amusement park fans. This summer seems to be no exception. Valravn debuts as Cedar Point’s 18th roller coaster. Among the multitude of record-breaking coasters located at the “Roller Coast”, Valravn broke 10 records when it opened this past weekend. 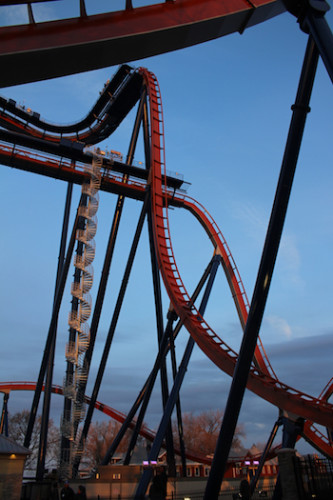 The name “Valravn” is said to be the name of a mythical “regal king of birds” swooping in to conquer all other dive coasters on the planet. While there has not been a dive coaster built in the United States in nine years, two debuted just last year internationally. This happens to be the 100th coaster designed by the storied Swiss company Bolliger and Mabillard. For Cedar Point and sister Ohio park Kings Island, it’s a nice bonus installing B&M coasters as the track is manufactured in Ohio just outside Cincinnati.

So, what is a dive coaster? The only other two United States dive coaster installations are at Busch Gardens in both Tampa (SheiKra) and Williamsburg (Griffon). The term “dive coaster” refers specifically to these B&M installations around the world since 1998. They all feature a 90 degree drop. Just before this “free fall” moment, a hold brake suspends riders for a few seconds prior to the drop. The trains sit on top of the track. They have two or tree rows. The rows seat six to 10 riders across. The seats are either traditional or floorless. Many contain inversions and some top out over 200 feet.

Valravn trains are three row, eight passenger and floorless. There are three trains. It is the tallest dive coaster at 223 feet, fastest at 75 mph, longest at 3,415 feet, and most inversions with three. But, how is the ride?

I was fortunate enough to get a dozen rides in ahead of the public debut. In a word – BIG! You will have a similar ride experience to its cousins in Williamsburg and Tampa, but this one has more of everything. In addition to the sheer size and speed, several features stand out. The initial dive drop into 165 foot Immelmann is an amazing start. As you approach the top of the initial hill, don’t forget to look around at the panoramic view of Ohio’s Great Lake and the park’s other attractions. The other highlight is just beyond the mid-course brake run. There is a wonderful combination of a dive loop into my favorite feature, the 270 degree roll. As an exclamation point, there are a few airtime humps to close out the ride.

If you fancy yourself a coaster enthusiast, get up to Cedar Point and check out the second most coasters of any park in the world and this new record breaking gem – Valravn.

• Andy Guinigundo is the author of the “Out of The Loop” column online and in “Attractions Magazine”. He lives in Cincinnati, Ohio with his wife and three daughters. He grew up frequenting theme parks around Ohio and making trips to Orlando with his family. You can follow Andy on Twitter at @AttractionsOOTL. 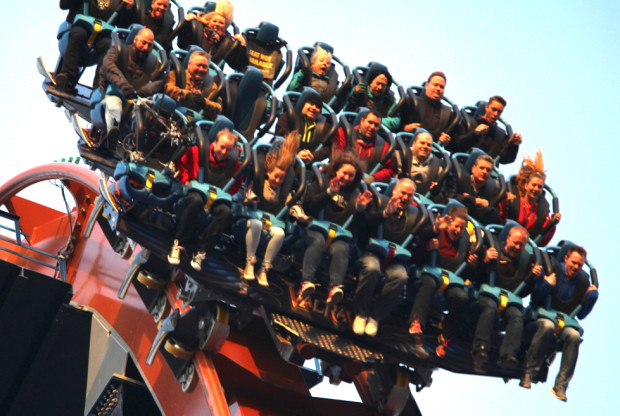 I’ll be there in just over a month. The family can’t wait!!! Keep up the good work OAM!

Cedar Point ramps up the nostalgia with...