Out of the Loop: Christmastime in Hershey PA 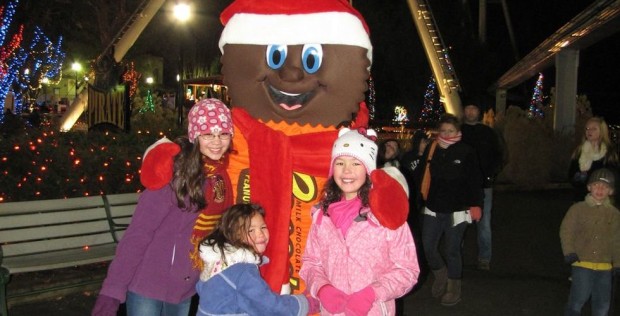 Nearly 1,000 miles north of Orlando and about 100 miles due west of Philadelphia lies the city of Hershey, Penn. As you could guess from the name, the famous chocolate is produced there – chocolate bars, Kisses and Reese Cups. In the summer months, Hershey and more specifically Hersheypark is a thrill-seeker’s paradise featuring 11 coasters. Like many parks, it has a holiday season. This time of year, they deck the halls with thousands of twinkling lights, hot cocoa, and of course the big guy in red.

Our family trip to Hershey actually started outside of the park at The Hershey Story Museum. As the name implies, the museum has a more educational slant. The entire upper floor is dedicated to the life story of Milton Hershey, his chocolate company, and the town that grew around that company – including the park that eventually became Hersheypark. The exhibits are full of artifacts from Hershey’s life, interactive games and multimedia presentations. While my children, ages 5, 9 and 11, did enjoy this area, I was glad we explored it first. The Chocolate Lab is hands-on and interactive, and they had so much fun, I’m not certain they would have been able to tone it down to then explore the upper museum level. 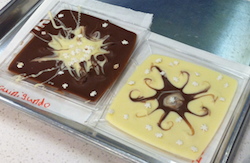 The Chocolate Lab was our next stop at the museum. I would say that Christmas and chocolate go hand in hand, and indeed all of the chocolate making classes are holiday themed this time of year. For example, the day we visited, the classes were entitled Make a Very Merry Bar, Candy Cane Bark, Create a Kris Kringle and Let it Snow Chocolate (the one we took). Quickly, instructions were given and soon we poured our base chocolate into a flat mold. Next we added a snowflake design in white chocolate. These were collected and placed in the freezer to set. While we waited, we had an education in chocolate making from bean to finished product. 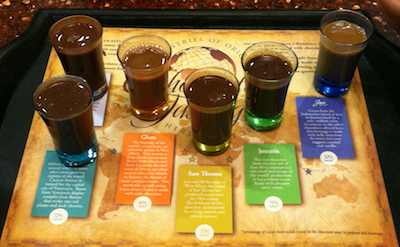 We then were given our creations back to be bagged for later indulgence. We ended our museum visit with a trip to the Café Zooka for a chocolate tasting featuring warm liquid chocolates from around the world.

As we left the museum, we made our way down Chocolate Ave., where we noticed the streetlights were in the shape of Hershey Kisses. It is not until you approach the parking area of Hersheypark that one realizes the size of the area; it’s big! It’s not Disney World big, but it is quite a large piece of property. From the parking lot, Hershey’s Chocolate World is to the right and Hersheypark is to the left. We ran out of time to visit Chocolate World, but I am told it is a more entertainment-based approach to the chocolate-making process including a ride and a 4D movie among other attractions. 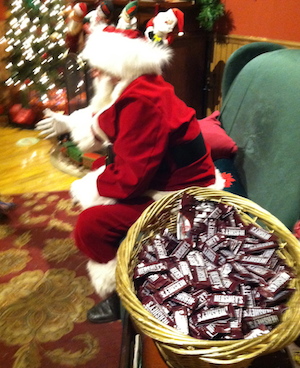 As you enter Hersheypark’s Christmas Candylane event, the sights and sounds of the season are evident. Holiday greenery adorns the area as do holiday lights. As we entered the park, we went straight to the man in red, Santa. As with any event like this, or even any mall-based Santa Claus, there’s a wait, but we didn’t mind. We appreciated the ability to use our own camera. They took pictures, but we felt no obligation to purchase. There was one twist on the usual Santa visit. One usually expects a candy cane gift if you are on the nice list. But, here in Hersheypark, one receives a Hershey mini chocolate bar. While all of the big thrill rides lie in hibernation, there are quite a few family and kids rides available. I’m certain riding a coaster in 20-degrees would not be a pleasant experience anyway, but I couldn’t help dreaming of summer while staring up at the wood and steel giants overhead. The Kissing Tower provides a covered, spinning, 360-degree panoramic view of not only the park and the thousands of dancing lights below, but also a good view of the Hershey factory. The Skyview sky ride also provided a great aerial view of the lights, specifically of N.O.E.L., the Nights of Extraordinary Lights.

N.O.E.L. is over 125,000 synchronized lights set to holiday favorite tunes. During the event, seasonal foods are served. There is a Christmas show. There is caroling and ice-skating. I think most would have trouble squeezing it all in a single visit. We ended our visit with a peak at some of Santa’s live reindeer and a picture with the Reese Cup character who was dressed in stocking cap and scarf for the cold.

Our night was not over. We jumped back into the car and headed up the road a few miles to the Sweet Lights drive-thru Christmas light display. With a Christmas soundtrack provided by a local radio station, this display was elaborate and impressive. Had it not been busy, you could probably get through the display in 30 minutes. The first section is two lanes that then merges down to one and this tended to slow things down a bit. Displays depict everything from chocolate themes to the 12 Days of Christmas and other Christmas scenes. It really was a relaxing end to a chocolate-filled, Christmas-themed day. 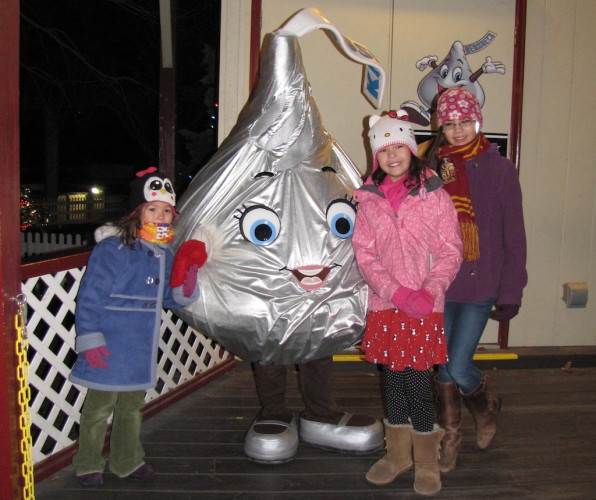