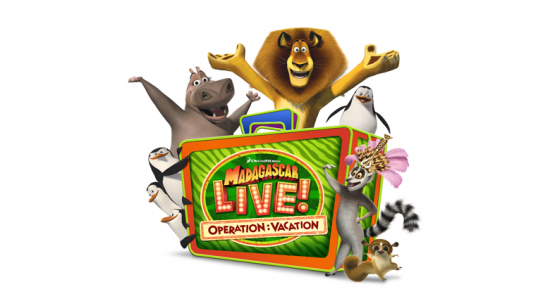 Earlier today, SeaWorld Parks & Entertainment announced an addition to the parks, “Madagascar Live! Operation: Vacation,” will be an original live musical show featuring the characters from DreamWorks Animation’s Madagascar franchise. The show will debut this Summer at both Busch Gardens Tampa and SeaWorld San Diego.

The 20-minute musical show follows Alex the Lion, Gloria the Hippo, King Julien, Mort and the Penguins during a vacation adventure. The show will feature rock/pop music performed by a live band and include both classic and original songs. The characters will also meet and greet with park guests daily . Additionally, special co-branded merchandise exclusive to the parks, will be available.

The show will debut at Busch Gardens Tampa on May 18, 2013 followed by SeaWorld San Diego on June 15, 2013. The company is planning on expanding to other parks in the SeaWorld family in the future as well. At Busch Gardens Tampa, the show will take place in the Stanleyville Theater, which will go under renovations to enclose it and make it an air conditioned venue.

“Audiences around the world have embraced the characters of Madagascar, and SeaWorld and Busch Gardens parks are the ideal places for families to enjoy this immersive live entertainment experience,” said DreamWorks Animation’s Head of Worldwide Licensing & Consumer Products, Kerry Phelan. “The entire creative team behind this uniquely original version of “Madagascar Live!” has done an impressive job of translating the beloved world from screen to stage, bringing it to life for young park guests and family audiences alike.”

Review: ‘Pirates of the Caribbean: On Stranger...