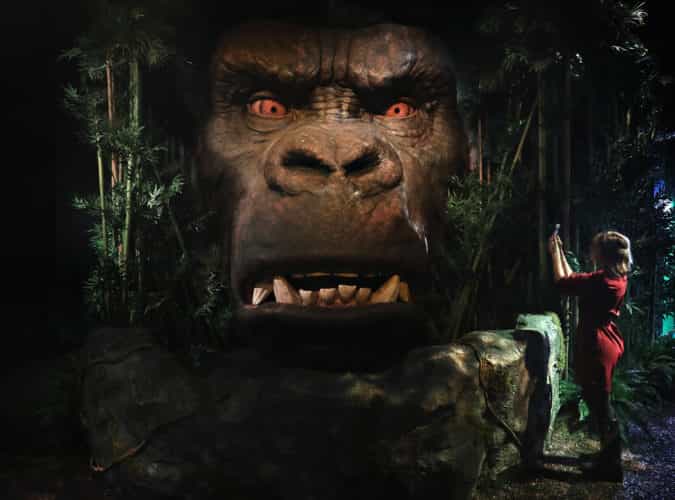 Filmdom’s favorite ape is about to make his big screen comeback, and visitors to Madame Tussauds wax museums in New York Citycan prepare for the adventure with the exclusive new Kong: Skull Island Experience.

Madame Tussauds New York and Madame Tussauds London in partnership with Legendary Pictures and Warner Bros. Pictures have officially unleashed Kong: Skull Island, an all-new, multi-sensory experience based on the upcoming film hitting theaters March 10. The Times Square attraction now offers its guests the one-of-a-kind chance to fully immerse themselves in the film’s environment, take a journey through the jungle and come face to face with an over 18-foot tall animatronic head of the mythical monster.

Journeying through bamboo, guests at the Manhattan foliage and vines, they will encounter the first ever wax likeness of British actor Tom Hiddleston, portraying the film’s heroic Captain James Conrad. Equipped with binoculars, a holster and gun, the figure was styled with the help of Legendary Pictures film stylists to portray the character.

Evading the traps of a colossal Mother Long-Legs spider, visitors will come face-to face with the over eighteen-foot, monstrous animatronic Kong head – a first for the iconic wax brand. True to the scale of beast portrayed in the film, the head took a team of 33 artists over 72 days to build. Weighing in at over 3,000 lbs, it required over 350 square feet of specialist faux hair and took approximately four weeks to hand paint. Each eye is 22 inches wide and uses laser radar to follow you around the room. The pneumatic animation system controls the pressure and flow of air to recreate facial movements, grunts, snorts and roars. The roar effect releases 240 PSI of high pressure air in four seconds, and at 90 dB, Kong’s roar is the sound of a Boeing 737 about to land.

Here’s a video of the Tussauds Kong animatronic in action:

“I think it’s great that there’s a Kong Skull Island experience at Madame Tussauds,” said Tom Hiddleston. “The idea that I’m going to be part of that exhibition is remarkable, and not something I ever expected.

“I hope when people come face-to-face with Kong himself they get some sense of what it might be like. Probably, a better sense than I had, because when I made the film, Kong wasn’t there, we had to imagine him. If people love the Kong character, they’ll love the Madame Tussauds head.” 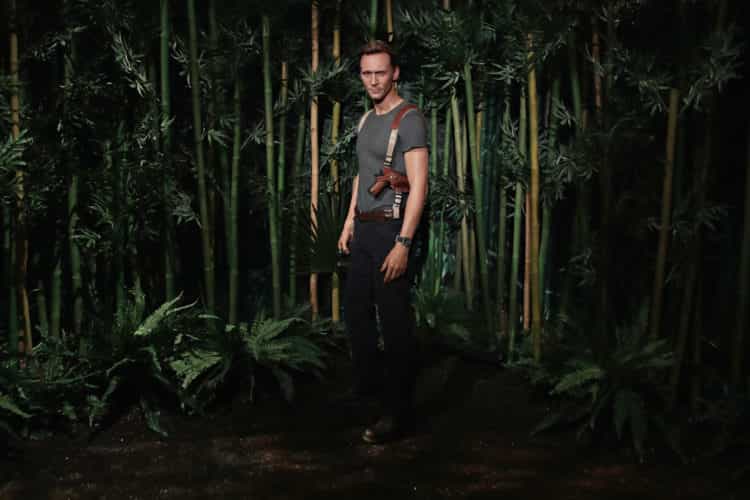 “Madame Tussauds is famous for providing the most authentic, thrilling and fun experiences for our guests so we are excited to launch our largest ever animatronic today as part of Kong: Skull Island,” said Anna Domingo, General Manager of Madame Tussauds New York. “We worked closely with Legendary Pictures to ensure our animatronic head is made to the exact film-scale, so visitors really will come face-to-face and feel the power and scale of the Kong depicted on the big screen.”

For more about Madame Tussauds New York, visit madametussauds.com/newyork, and watch this video for a POV walkthrough of its sister museum at the Orlando Eye:

Experience some of the Big Apple’s top attractions...

Legoland New York is tricked out for ‘Brick-Or-Treat’

More closures and the most important Mando...