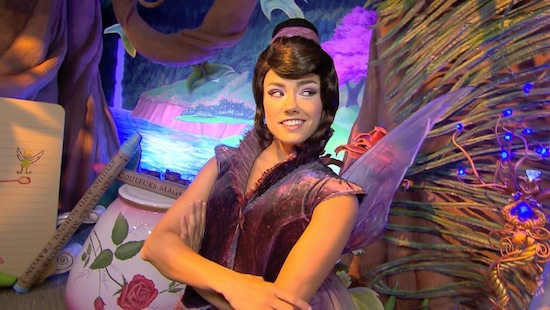 Vidia, one of the stars of the upcoming movie Tinker Bell and the Great Fairy Rescue, is the newest fairy to become a “resident” of Pixie Hollow at the Magic Kingdom.

Guests can meet Vidia and her pixie pals – including Tinker Bell, Fawn, Iridessa, Rosetta, Silvermist and Terence – inside Pixie Hollow in Toontown. Vidia, who is known as the fastest-flying fairy there is, began making meet-and-greet appearances for guests today, Aug. 26, 2010.

Tinker Bell and the Great Fairy Rescue will be released on Blu-ray, DVD and via movie download on Sept. 21, 2010.

Meet Vidia, the newest resident in Pixie Hollow at the Magic Kingdom

Here’s Tink and some of the other fairies when they made their debut in Orlando.

Check out these sweet treats at Walt Disney...

‘Fairies Week’ to bring together Disney Fairies for...

Movie Review: Find out the secret of Tinker...

Periwinkle from Disney’s ‘Secret of the Wings’ now...

Some of the stuff I read on your blog is just great. Keep up the wonderful work. ~Christina

this is so babyish! Seriously! People who like this probobably cannot write!