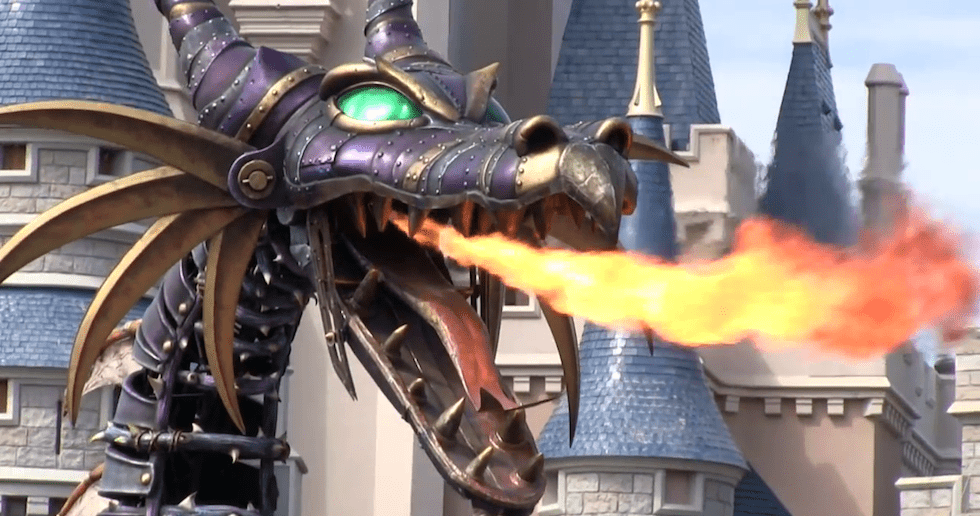 The Maleficent float in the “Festival of Fantasy” parade caught fire today in Magic Kingdom.

The Maleficent dragon float caught on fire today during the 3:00 performance of the “Festival of Fantasy” parade at Magic Kingdom in Walt Disney World.

In the usual performance of the parade, the dragon’s head shoots a blast of fire from its nose, timed to the parade’s score. Check out our video of Chris Ort from Walt Disney Imagineering explaining how the fire effect works below (13:15):

During today’s performance, the entire head of the dragon caught on fire in the Liberty Square section of the parade, but was fully extinguished. Video courtesy of Taylor Standridge:

“No one was injured,” said Standridge. “The staff responded as quickly as possible.”

Re the dragon on fire: they have closed the entirety of liberty square for safety and pushing everyone in Frontierland through Adventureland, the end of the parade is stopped with no characters or dancers and we were told they are waiting on a truck to to tow the float pic.twitter.com/LLbKOtabxl

The area was immediately cleared, and there were no injuries to guests or Cast Members in the area. The Maleficent float is damaged from the incident, though it is unclear if or how this will affect the daily operation of the “Festival of Fantasy” parade in Magic Kingdom.

Here it is. Freshly charred dragon after it caught fire during today's Festival of Fantasy parade at Magic Kingdom. #festivaloffantasy #magickingdom #disney pic.twitter.com/I4pZquCKV2

Check out our video of the Maleficent float on its first day of the parade below:

Roy Meets World – Theme Parks at the Roll of the Dice