Photo and video highlights below. Check out the premier issue of Orlando Attractions Magazine for a first-hand account from someone who ran last year. 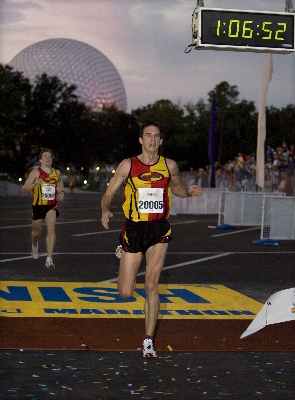 Photo by Jimmy DeFlippo.
Chad Johnson (front) and C. Fred Joslyn (back), members of the “Hansons-Brooks” distance running team from Rochester, Mich., race to the finish line at Epcot Jan. 12 during the Walt Disney World Half Marathon. Johnson, 31, beat out teammate Joslyn, 23, by only one second, with an official winning time of 1:06:53. 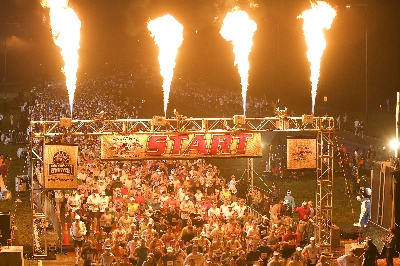 Photo by Matt Stroshane.
Pyrotechnics light the sky at the starting line at 6 a.m. Sunday to mark the beginning of the 15th annual Walt Disney World Marathon. 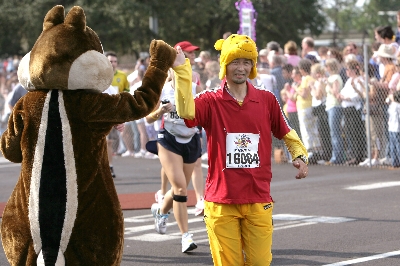 Photo by Matt Stroshane.
Masanari Kamada, of Higashi-Osaka, Japan, dressed as Winnie the Pooh, high-fives Chip as he finishes the marathon. Dressed as the famous bear, Kamada completed the 26.2-mile trek in 6:00:41. 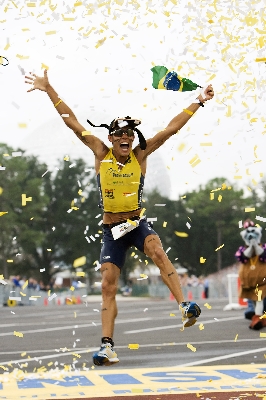 Photo by Matt Stroshane.
Brazilian Adriano Bastos, donning a Goofy hat and waving a Brazilian flag, leaps across the finish line to win his fifth Walt Disney World Marathon. Bastos, 29, of Sao Paulo, Brazil, posted a winning time of 2:20:58. With the victory, Bastos has now won five of the 15 total Disney Marathon events and four straight.