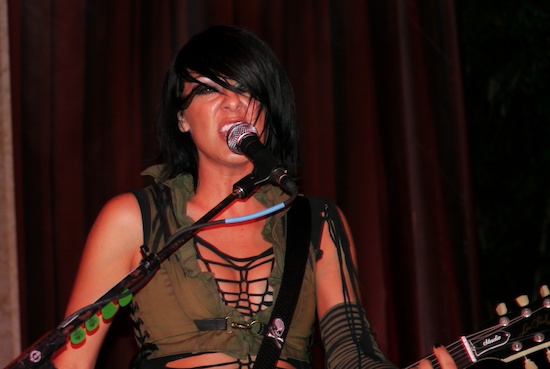 Busch Gardens Howl-O-Scream fans know her as Sylvie, the female lead of the killer rock band MyX, who ripped her cheating boyfriend’s fingers off before killing him. While really a rocker, the real woman behind the Sylvie character is much more likable. Meet Kelly Riot. 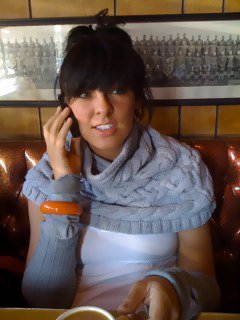 Howl-O-Scream usually features an different icon each year. Past Howl-O-Scream icons have included the Raven Twins and Ms. Vayne. But what makes Sylvie different is that each year’s icon is usually portrayed by several different actresses. But no matter where you saw Sylvie – on TV, billboards or at the event – you were always seeing Kelly Riot.

Kelly had played a few small roles such as Cinderella and other characters at kids birthday parties where she lives in Los Angeles, but her main focus is being the lead singer for her band, Hot Riot.

When Busch Gardens started its search for Sylvie, they held casting calls in L.A. But they weren’t happy with the non-rocker models and soap opera actresses that were applying. It just so happened that the director of the audition was friends with a friend of Kellys. When the director complained to his friend that they weren’t getting any rockers, Kelly’s friend told him she knew just the person.

“I was skateboarding around and I was all sweaty and had no makeup on,” said Kelly. “My friend called and said ‘they’re stopping auditions in 45 minutes. You have to get over there right now.’ I had no idea what it was for. I showed up with my acoustic guitar and there were about 35 girls lined up, waiting to audition. They were all gorgeous and I was still sweating.”

They took her in ahead of the other girls. She auditioned and left thinking there was no way she was going to get the part, whatever it was. She returned for a second audition, still not realizing what role she was trying out for. “I made them crack up. One of them fell off their chair they were laughing so hard. I left the audition going ‘I totally didn’t get that.'”

She finally figured out she must have gotten the job when a wardrobe person called to get her sizes. At this point she still didn’t know what role she would be playing. “I thought it was probably a one day shoot for a commercial,” she said. Once contracts arrived in the mail, she freaked out and was very excited. She said she was particuarly excited to find out about the role because she’s a true horror fan and Halloween is her favorite holiday.

“It was like a cherry on top to know that not only was I going to be performing live with a band, but that it was all wrapped around Halloween. It was definitely a dream gig.”

Kelly’s Hot Riot bandmates weren’t too happy to hear she was going to be away for 40 days, but they realized what a great opportunity this would be for her and for the band.

While still in L.A., Kelly had to study up on Sylvie’s “background” and then endure three full days of wardrobe, photo shoots and a music video shoot.

Once in Tampa, Kelly was paired up with some local musicians to form Sylvie’s band, MyX. “They’re all amazing musicians,” added Kelly.

It was just days after Sylvie was revealed to the public that some people online started putting two and two together and realized it was Kelly who was playing Sylvie. Of course, Busch Gardens didn’t want Sylvie to be known as Kelly until after Halloween. “I was deleting things left and right (on her band’s Facebook wall). I made sure I didn’t answer any questions people were e-mailing me about. I got so bombarded by kids finding out about me and writing me … there were so many of them that I just ended up giving up.

“Not only did I get to work with amazing people at Busch Gardens … But what made this an even more amazing experience were the fans that came out. I was worried that it was going to be a bunch of drunk older improper men falling all over me … but what ended up happening was a bunch of teens, tweens and college kids were there. They were great to perform to. It started off with people like ‘OK This is cool. I’ll stop and listen’, to towards the end of it they were real fans. They loved the music. They loved the image Busch had for me, and they loved everything about it. They were legit fans who were singing every song with me.”

MyX in concert at Howl-O-Scream:

All during Halloween season, Kelly’s face could be seen everywhere. She was on billboards throughout Central Florida, on TV and on numerous items for sale online and in Busch Gardens’ Shop of Horrors.

In addition to performing each night of Howl-O-Scream and meeting fans there, Kelly also had to make special appearances outside of the park and even do interviews as Sylvie with members of the media.

In talking about the interviews, Kelly said, “That was extremely difficult. Not only did I have to know Sylvie’s back story by heart and be good at improving … (but) all of my media training on how to be politically correct was thrown out the window. They wanted me to do all the opposites of what you’re supposed to do – get bored, maybe not answer questions, storm off set – it was like retraining myself to do the things that were considered taboo. I had to be a brat.

“By the middle of it I was taking full advantage of it because it will never happen again. I will never be able to act that way ever again. So I was really soaking it in and enjoying it.”

Kelly says she has a lot of funny stories from being Sylvie, one in particular is talking with people who didn’t believe she was the real Sylvie. “A lot of people were like ‘yeah, I guess you kind of look like her.'” 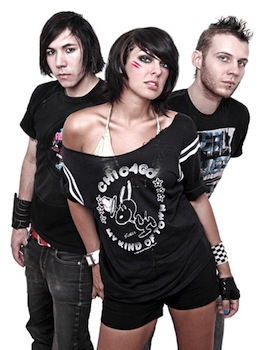 Now that Howl-O-Scream is over, Kelly is back in L.A. and back performing with Hot Riot. Because of the exposure she’s had through the event, she’s had different groups approach her about working with her and Hot Riot. She can’t give any names yet, but she says a bigwig producer is working to get her in a professional studio to rerecord their current Hot Riot songs plus a couple more to produce a full-length album.

Kelly hopes to start some big tours with her band soon. “I love Florida and everyone in it. I can not wait to come back as Kelly Riot with Hot Riot and really blow their socks off. I’m definitely coming back to Florida pretty soon.”

As for the future of Sylvie, Kelly said she’s had no talks with Busch Gardens about Sylvie returning to future Howl-O-Scream events. “I think they have the next two characters for the next two years already lined up,” she said. “They’re being very hush hush about it.”

You can find out more about Hot Riot at their Facebook page and listen to some of their songs at their MySpace page.

For a better look at the real Kelly, here’s a personal video she made before becoming Sylvie called “Things I do for Money”:

Things I do for money pt.1

UPDATE: Here’s a new version of “Things I do for Money” where Kelly talks about her experiences as Sylvie:

Things I do For Money Pt 3.mov

Planes, boats and automobiles to be featured at Fantasy of Flight’s Roar n’ Soar 2010